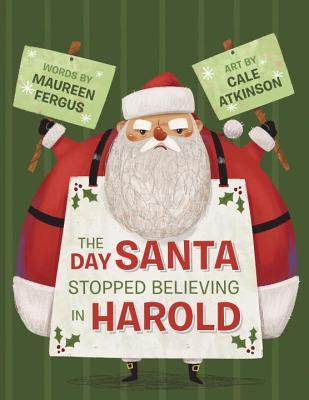 Santa has a problem. This kid? Harold? Santa doesn’t think he’s real. He WANTS to believe in Harold–after all, Harold is one of the most magical parts of Christmas. Getting Harold’s letters, eating the cookies he leaves out, feeding his carrots to the reindeer… what would Christmas be without that? But Santa’s just not sure. Some of his friends are telling him they think Harold’s not real. And the Harold that sat on his knee last Christmas looked AWFULLY different. Santa comes up with a plan to find out once and for all if Harold really exists… with hilarious consequences.

Review:  Santa is doubting if Harold is real and Harold is doubting if Santa is real.  The two both come up with a plan to see if the other does indeed exist.  Maureen Fergus has written several children’s books, however this was our first time reading her work.  My son found the illustrations of Santa funny with his giant round belly and body and tiny legs and arms.  The story gets a plus for depicting a multiracial family.  My eight-year-old son is at the age where he may be starting to doubt the existence of Santa Claus.  As I was reading this book to him I was cringing a little inside, hoping he wouldn’t bring up the question if Santa was real.  Be wary of reading this book to children who may be doubting the existence of Santa.