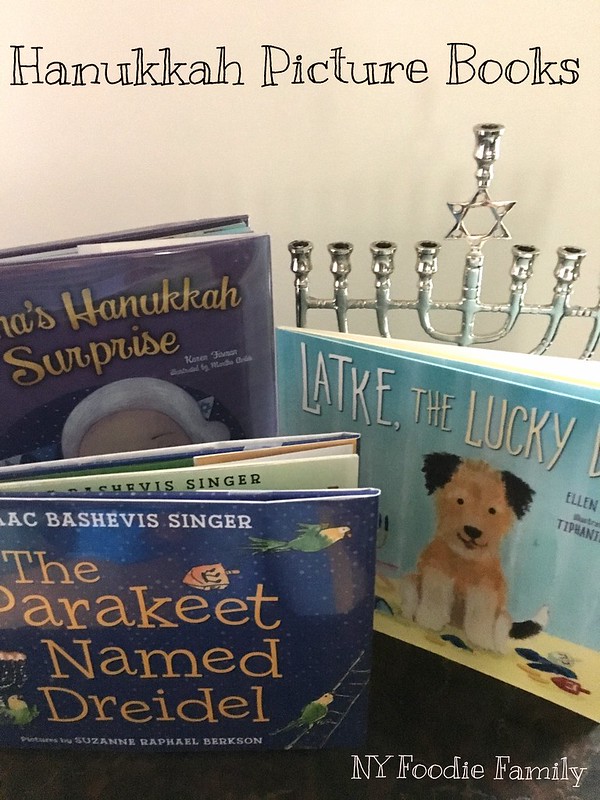 Hanukkah begins this Sunday evening at sundown.  My husband is half-Jewish.  While he was not raised with a religious upbringing, we like to acknowledge the holiday with the kids.  This is often done with latkes, playing dreidel, lighting the menorah and of course, reading picture books.  Here are some of the Hanukkah picture books that we have read. 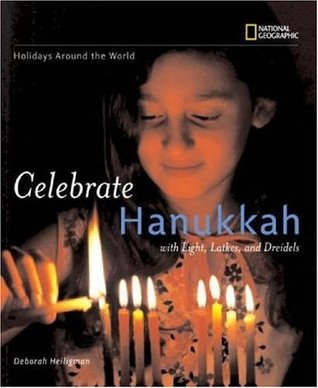 Celebrate Hanukkah (Holidays Around the World) by Deborah Heiligman – While we enjoy reading fiction picture books about the holidays, I think it is important that we also read nonfiction books as wel. It is hard to find children’s books that describe and explain holidays so that young children can understand them.  We first read this book a couple of years ago, when my kids were 4 and 6.  Although this book is geared toward 1st through 4th graders, I was pleasantly surprised to find that it was understandable to my then 6 year old daughter.  While it may have been a little advanced for my son he enjoyed looking at the pictures.   The text is short and simple, yet informative.  Being from National Geographic, you get a global perspective of the holiday with photographs of children from all over the world and information on how they celebrate the holiday.  At the end of the book there are instructions on how to light the menorah and the prayers, a recipe for latkes, and instructions on playing the dreidel game. There are also books and websites listed in the back if you want to find out more about the holiday.  This is a book that was informational and enjoyable for the whole family. 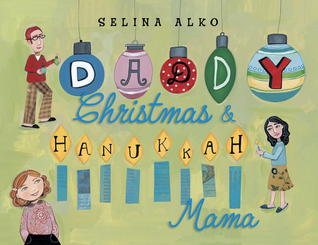 Daddy Christmas and Hanukkah Mama by Selina Alko – In our house this book would be titled Hanukkah Daddy & Christmas Mommy, being that my husband is part Jewish.  I thought the kids would enjoy this book because like Sadie, the main character, they celebrate both holidays.  In Sadie’s house though Daddy makes latkes and they leave them on the mantel with some milk for Santa.  I think some of the “mixing” of holidays is a bit much when Mama puts gelt under the tree and Daddy hangs candy canes from the menorah.  Although I like to celebrate each holiday on its own I think it was nice that this family was able to create their own traditions combining the two.  The illustrations had an interesting decoupage of different mediums.  I found it both cool and slightly distracting.  Mom is wearing “real” jeans but the steam coming from the latkes and turkey are cut from pages of text from either a book or newspaper.  The author provides a recipe for Cranberry Kugel Dressing at the back of the book which looks interesting.  We enjoyed this book and I thought that it was a nice transition to Christmas, which is quickly approaching. 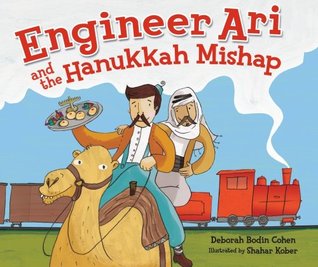 Engineer Ari and the Hanukkah Mishap by Deborah Bodin Cohen – After reading this book I discovered that it’s the third in the Engineer Ari series.  The other books in the series are about Rosh Hashanah and Sukkah.  In this story Engineer Ari is getting ready to celebrate Hanukkah with his Engineer friends Nathaniel and Jessie.  He’s in a rush and carrying all of his packages, including dreidels, sufganiyots (jelly doughnuts), a hanukkiah (menorah) and some oil.  He drives his train but isn’t paying attention and almost hits a camel.  Although Ari’s okay, his packages fall.  A Bedouin comes to help him and they end up celebrating Hanukkah together.  The story takes place in Jerusalem and there are a few references to cities and landmarks which I found informative.  I found the story to be forced in some parts to get in the “Hanukkah” explanation.  When Engineer Ari sees two boys playing he says, “Tell me who you are.”  The boys explain that they are King Antiochus and Judah Maccabee and give descriptions of each. Similarly, when Ari comes upon two girls playing dreidel he asks, “Can you tell me the letters on your dreidel?”  which leads to a description of the meanings.  You can tell Cohen is trying to teach readers about Hanukkah, but it just doesn’t seem to flow well in the story.  There’s a short glossary in the beginning of the story with words the reader may not be familiar with. 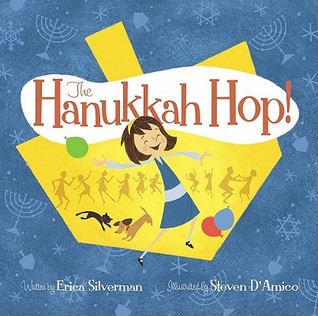 The Hanukkah Hop by Erica Silverman – This is a picture book told in rhyme.  Rachel and her family are preparing the house for a Hanukkah party – hanging streamers and balloons, making latkes, and clearing space for a dance floor.  As the guests arrive they light the menorah, sing songs around the piano, eat latkes and doughnuts, and listen to the story of the Maccabees.  But Rachel’s most excited for the dancing.  Once the special klezmer band arrives everyone’s out on the dance floor.  This is a fun and entertaining holiday read. My son was hysterical when I read that “Bubbes and zaydes zoom in by plane.”  My husband and I had to explain that the words are Yiddish for grandma and grandpa.  There’s a glossary in the front of the book of some words used in the story that children may not know. 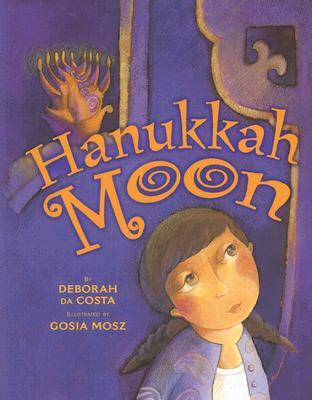 Hanukkah Moon by Deborah Da Costa – In this picture book Isobel goes to visit her Aunt Luisa’s house during the beginning of Hanukkah.  Aunt Luisa has just moved from Mexico and Isobel is unsure that she will know how to celebrate Hanukkah in the United States.  Isobel discovers that her Aunt celebrates the holiday with both the familiar (eating latkes) and the unfamiliar (celebrating the Hanukkah Moon).  There’s also the familiar with a Mexican twist (a hanukkiah/menorah handmade by her aunt to resemble Noah’s Ark), Feliz Januca (Happy Hanukkah in Spanish) and a dreidel shaped pinata.  I even learned something new about Rosh Hodesh, the celebration of the new moon, and the significance of the time for women.  Isobel receives a camera from her aunt and the enjoy time together taking pictures of and identifying the birds that visit her aunt’s tree.  We all found this story interesting because of the Mexican influences that were introduced to us.  There is a glossary at the end of the book with definitions of some of the words children may be unfamiliar with.  This was a very enjoyable Hanukkah themed picture book. 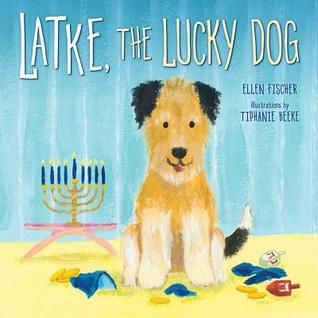 Latke, the Lucky Dog by Eileen Fischer – On the first night of Hanukkah, Latke is rescued from the animal shelter.  This story is told from his point of view as he gets into lots of trouble throughout the eight nights “exploring” the family’s Hanukkah celebration.   This was a colorfully illustrated story which many pet owners can probably relate to.  There is a very short description of Hanukkah at the end of the book. 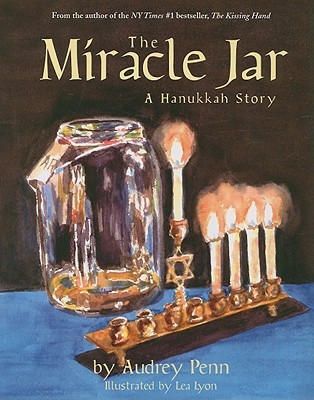 The Miracle Jar: A Hanukkah Story by Audrey Penn – In this holiday book Sophie and her family are preparing for Hanukkah.  Her father tells Sophie and her brother the story of Juddah the Maccabee and the miracle of the oil that lasted eight days and nights.  Similar to the problem of the Maccabees, Sophie’s mother discovers that they do not have enough oil in their oil jar to make their eight nights of treats. There is too much snow to get to the store so Sophie suggests that they make their own miracle and try to make the oil last the eight nights.  Every night mother makes a new treat including latkes, doughnuts, corn fritters, and fried apples.  But will their oil last for eight nights?!  Only after reading this book (when I read the author and illustrator bio) did I realize that Audrey Penn is the same author who wrote The Kissing Hand, a family favorite.  I enjoyed that Sophie swept the floor and her brother polished the menorah as their Hanukkah gifts to their parents.  I think it’s nice that the focus wasn’t on “things” as gifts.  We enjoyed this book a lot. 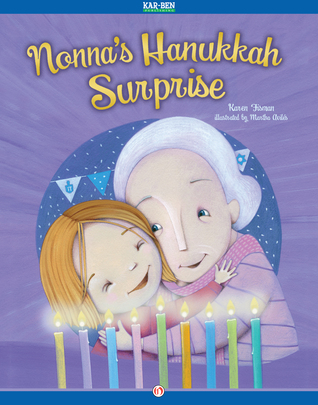 Nonna’s Hanukkah Surprise by Karen Fisman – Rachel loves her Nonna, but doesn’t want to visit for the holidays since Nonna and her cousins celebrate Christmas and she celebrates Hanukkah.  Her parents gift her with a special menorah made of girl Maccabees and tell her that they are going to bring Hanukkah to Nonna’s.  When Rachel accidentally leaves her bag with the menorah on the plane, she thinks that Hanukkah will be ruined.  However, Nonna comes to the rescue with a beautiful surprise.  This is a recently published book and the illustrations have a modern feel to them.  This is a feel-good Hanukkah story that we really enjoyed.

The Parakeet Named Dreidel by Isaac Bashevis Singer –  This is a recent picture book adaption from a short story written by the now deceased, award-winning author.  A father tells the story of how many years ago his family acquired a parakeet, which they appropriately name Dreidel, after finding it while celebrating Hanukkah.  Although a search for the parakeet’s owners was conducted, they were never found.  Years later, the narrator’s son ends up meeting the parakeet’s owner while at a college party.  The two end up getting engaged and note that “Dreidel was our matchmaker.”   This story focuses more on the parakeet and the family and touches upon Hanukkah.  Overall, this was just an okay book for us.

When Mindy Saved Hanukkah by Eric A. Kimmel –  In this story the Kleins, a “little” family live behind the wall in the synagogue.  They need to get a candle for their menorah to celebrate Hanukkah, but Mindy’s father hurt his ankle.  Mindy volunteers to get the candle but she has to watch out for the cat.  With a little help from Zayde Mindy shows bravery and helps to save the family’s Hanukkah celebration.   This book contains a glossary at the end for words that the reader may not be familiar with.  The author also includes the recipe for Bubbe Klein’s Golden Potato Latkes.  The kids enjoyed this story and liked pointing out all of the clues that the Kleins were little (“The candle is bigger than they are!”). The line that stood out for me the most is whe Mama says, “Heroes come in all sizes. Some are big.  Some are little.  Some lived long ago.  Some live today.”  This was a different type of Hanukkah read which we enjoyed.

Do you have any favorite Hanukkah books to recommend?