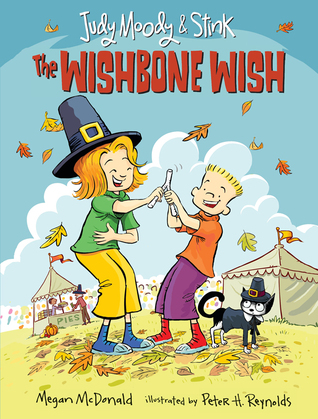 Goodreads Summary:
On your mark, get set, Gobblers-a-Go-Go! Judy swears she’ll win the race for a Thanksgiving turkey (though Stink has his doubts) in this full-color Moody adventure.     The town’s annual Turkey Trot race and festival is coming up, and Judy and Stink are training to win. Judy has decided that she is going to take home the big prize: a fat, juicy turkey. They can taste it already: the moist turkey, the hot gravy, the savory stuffing, the cranberry sauce! Beep! Beep! Beep!That’s the sound of Stink’s Rapidfire Ultra XE611M25 stopwatch going off as Judy and Stink hop, crawl, and climb toward race day. But what if they don’t win a mouthwatering bird? What then? Flying turkey gizzards! Will the Moody family end up starving on T-day, like ye pilgrims of olde, or will Grandma Lou cook up a tasty Franksgiving solution?

Review:
I haven’t read many Thanksgiving themed chapter books in my time.  However, both my eight year-old son and I found this book to be very enjoyable.  Judy Moody and Stink are siblings that each star in their own series by Megan McDonald.  This is one of the few crossover books that feature them together.  In this book Judy is excited that she convinced her parents to travel to her grandmother’s house for Thanksgiving dinner after her school’s Thanksgiving festival.  This will be the first year that she gets to participate in the festivities, including a Turkey Trot, in which the winner receives a turkey.  Judy and Stink practice for the Triple Fun Relay with some minor mishaps along the way.  Does Judy win the race?  I enjoyed that McDonald presents a lot of factual information on a variety of topics to the reader in a way that doesn’t lose the flow of the story.  I learned more about Sarah Josepha Hale and her role in Thanksgiving.  And did you know that Jell-O is the official state snack food of Utah?!  This book has seven chapters with colorful illustrations.  The Wishbone Wish was a humorous and enjoyable holiday read!