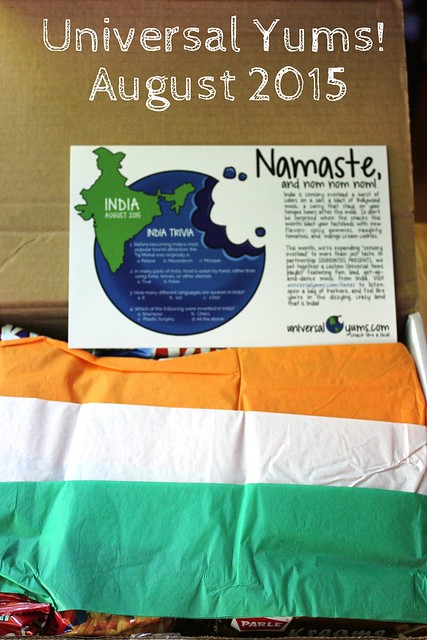 We have been subscribing to the Universal Yums! snack box for several months now.  We are still a little behind in our reviews of our boxes but have finally gotten the August review post published!  The August box featured snacks from India.  Based on last month’s clues, we had figured this out prior to the box arriving.  We were excited to try snacks from India, since we had never had any before.  The box ships mid-month and usually arrives a couple of days after being shipped.  This month’s box included a new feature, a playlist of songs from the country that you can listen to while enjoying the snacks. 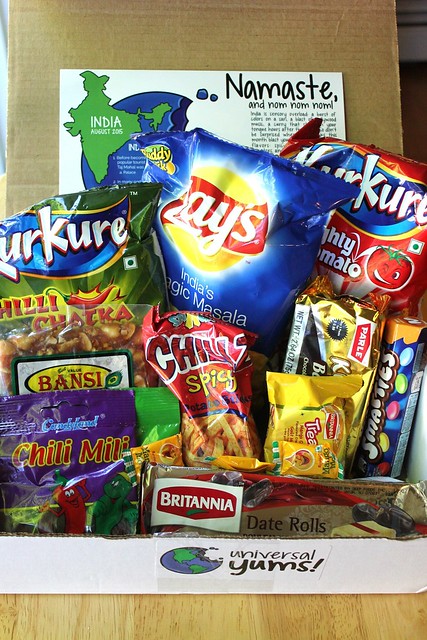 This box included the usual variety of sweet and salty snacks.  There were two varieties of Kurkure snacks.  The Chili Chatka Kurkures were spicy, as the name and chili pepper pictured on the front of the bag suggest.  The Naughty Tomato flavor Kurkure is described on the information card as “a snack that tastes like tomatoes, but these have a hint of spice with a sweeter, almost cinnamon aftertaste.”  I found these to be spicy as well and didn’t enjoy this variety either.  The Weekend Chef enjoyed them both so they got eaten.  The kids didn’t bother trying either when they heard they were on the spicy side. 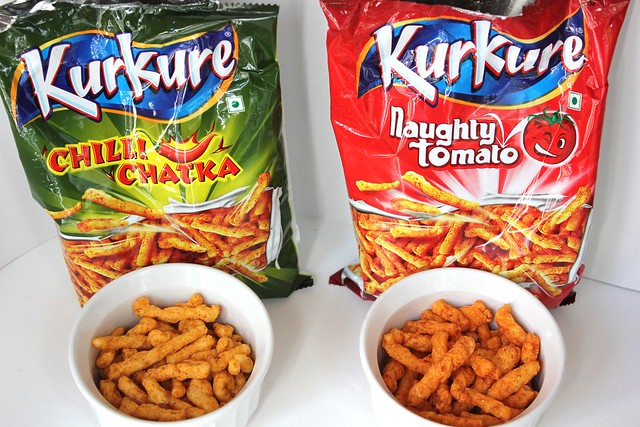 Also included were Parle Kreams Bourbon (2.65 oz).  There were eight cookies in the package.  These were chocolate sandwich cookies with tiny sugar crystals on top of the cookies.  There was nothing extraordinary about these cookies and they tasted like cookies that we could get locally in the supermarket.  However, we all enjoyed them.  The Weekend Chef gets annoyed that the wrapper notes that there is one serving per container, with a serving size being 6 pieces.  However, there are eight cookies in the package.

The Brittannia Treat Mango Cremes (1.3 oz) were a sugar cookie filled with a mango crème filling.  There were four cookies in the package.  This was another snack that we all enjoyed.  The information card noted that In 2013 the Girl Scouts sold Mango Cream cookies which tasted very similar to these cookies.  Unfortunately, our Girl Scouts did not sell these, so we missed out!

The Nestle Smarties are like large M&Ms.  Although the chocolate discs had different colored candy coatings, they all tasted the same…..except for the orange colored coated candy that tasted like oranges.  This was another winner. 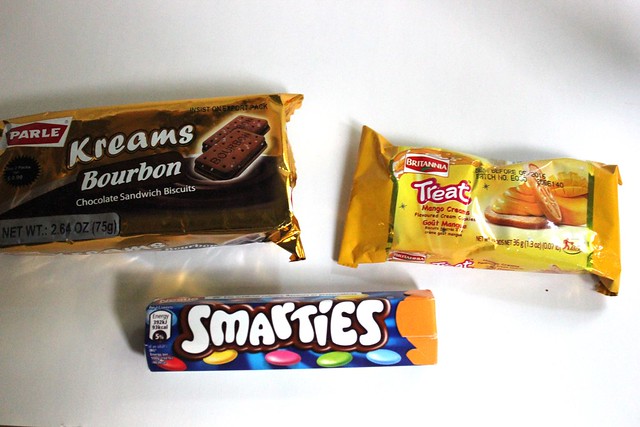 The picture below shows Britannia Date Rolls.  This 3.17 oz. package included eight cookies.  The cookies were similar to a fig newton but had a harder, crumblier cookie.  The filling was only a very thin layer that was not too sweet.  The Weekend Chef called these the “not fig newtons.”  He normally doesn’t like dates but enjoyed these cookies.  Everyone but our daughter liked these cookies.

In the green bag were Candyland Jelly Amrood.  There were about ten pieces of pear and/or guava shaped gummy candies in the bag.  The gummies had little flecks of pepper and had a “sour, sweet, and pepper” flavor.  Our son ended up eating most of these.

One of my favorite snacks in the box was the Best Value Bansi Peanut Chikki (3.5 oz).  This was peanut brittle. Good peanut brittle!  Nothing stood out to us that made it an “Indian” snack.  However, the card noted that this brittle is made with jaggery, a non-centrifugal cane sugar that is eaten in Asia and Africa. 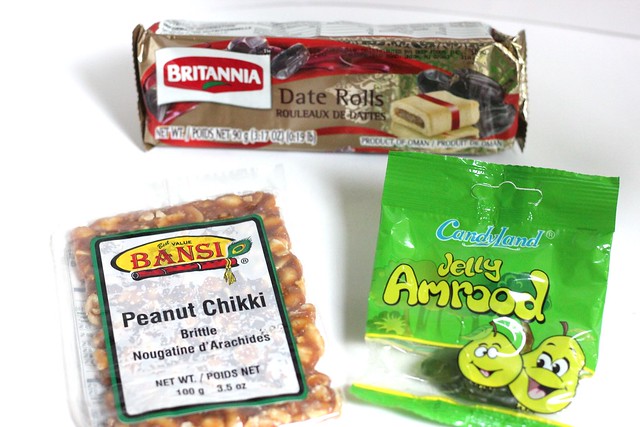 The box also had a 0.88 oz. bag of  Snack City Chillz Spicy Potato Sticks.  These were spicy as well and only the Weekend Chef at them.

There were four pieces of Mango Moody Candy.  These hard candies are made from mango pulp.  These weren’t my fave, but the kids liked these. 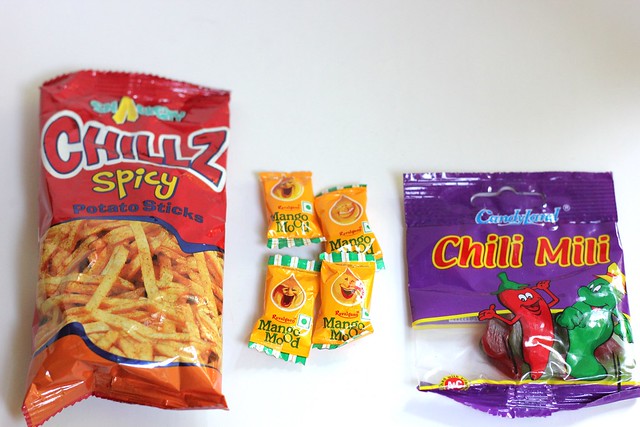 Finally, there was a bag of Lay’s Masala Magic flavored potato chips.   These were ruffled potato chips with a spicy seasoning blend.  They were a little spicy for me and the kids, but again, good thing the Weekend Chef likes spicy snacks! 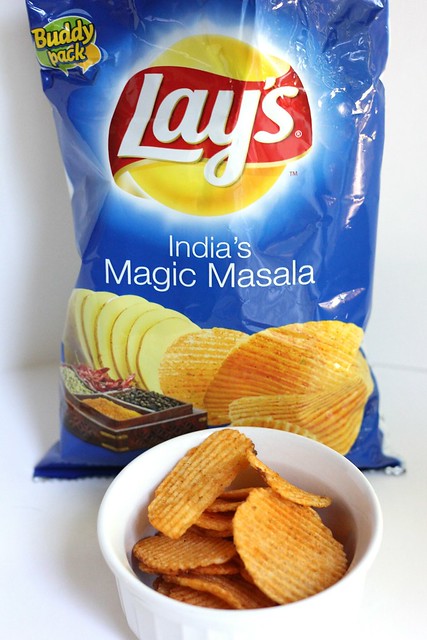 Overall, we were happy with the variety of snacks in the India box.  There were several snacks that the family couldn’t enjoy because they were too spicy.   However, it’s always fun to try snacks from a different country!