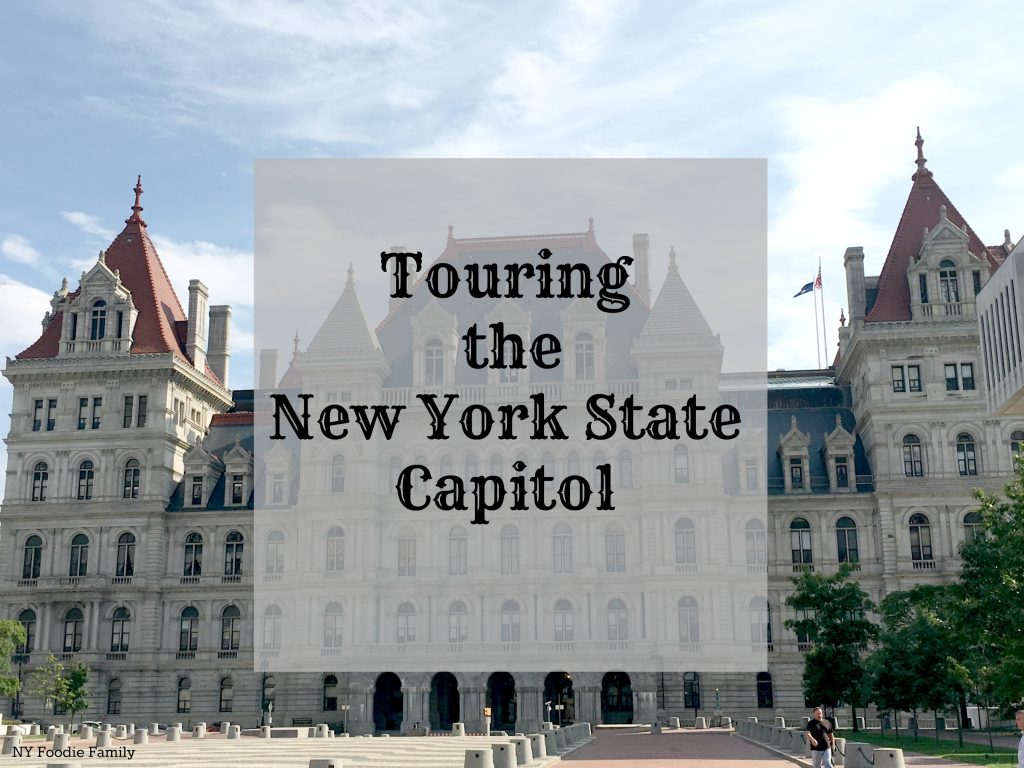 I’ve been a life-long resident of New York state and somehow made it to my late 30’s without ever visiting our state Capitol.  Located in Albany, it is just a two hour drive from northern Westchester County. As the mother of soon-to-be 4th and 6th graders, I wanted to visit with the kids this summer.

After parking in the visitor lot, we took the elevator up to the main concourse and entered the Capitol.  Whether you enter the Capitol through the main entrance or the concourse, you must pass through a metal detector and all bags will be scanned. We arrived at 9:30 AM and went to the tour desk to sign up for the free 10 AM guided tour.  I was surprised that we were the only family from New York in our tour group.  Only one other family had children, but my 9 and 11-year-old were the youngest on the tour.

Our tour guide was very informative and we learned a lot.   Photography is allowed and encouraged throughout the tour.  Since our group was small, our guide even volunteered to take family photos at both the elevator and the Million Dollar Staircase. 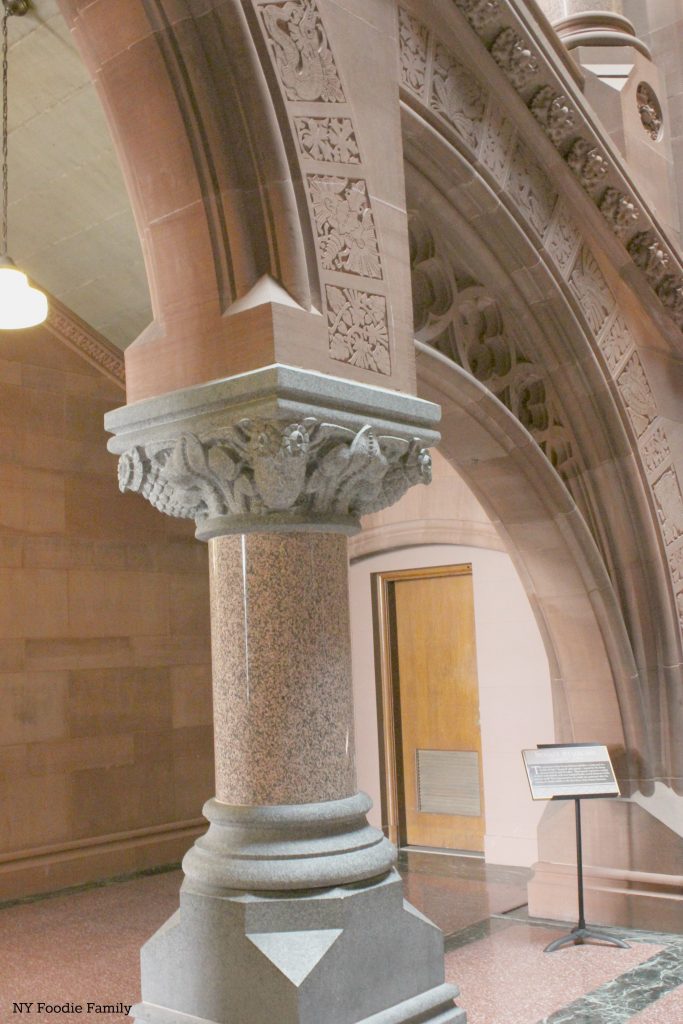 The first stop on the tour is the Senate Staircase. This staircase went through a major renovation and the final results were unveiled by Governor Andrew Cuomo in 2013.  The brightened space showcases the detailed stone carvings that decorate the staircase. 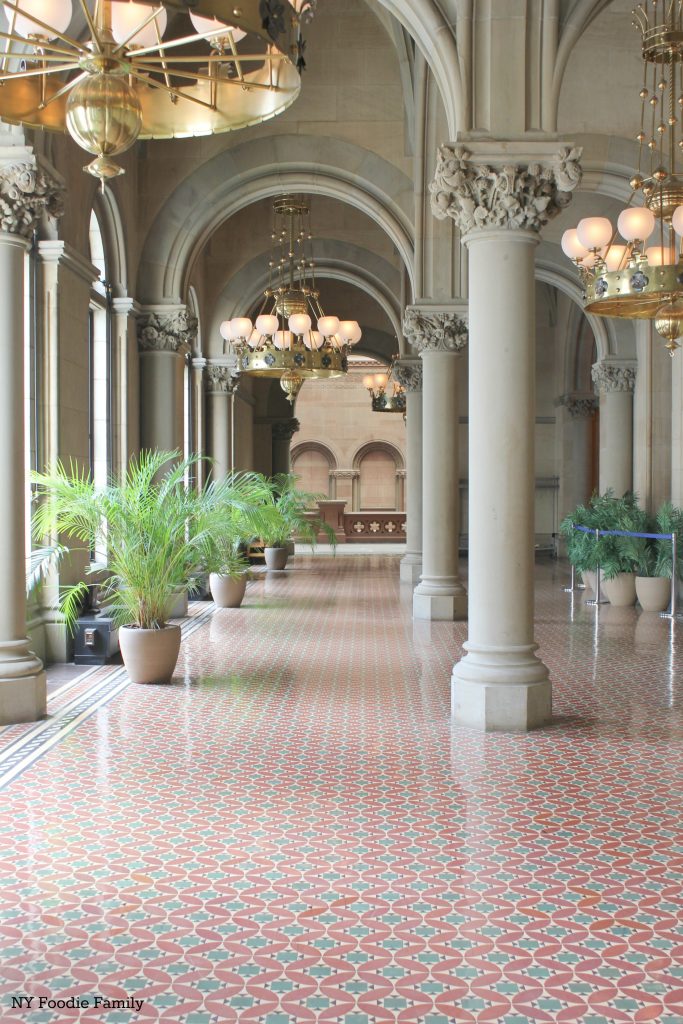 Construction on the Capitol began in 1867 and wasn’t completed until 1899, with a final cost of $25 million dollars. This made it the most expensive government building at the time.  Although a dome was planned, one was never constructed due to financial reasons.  This leaves the New York State Capitol as one of only a few state capitols without a dome. 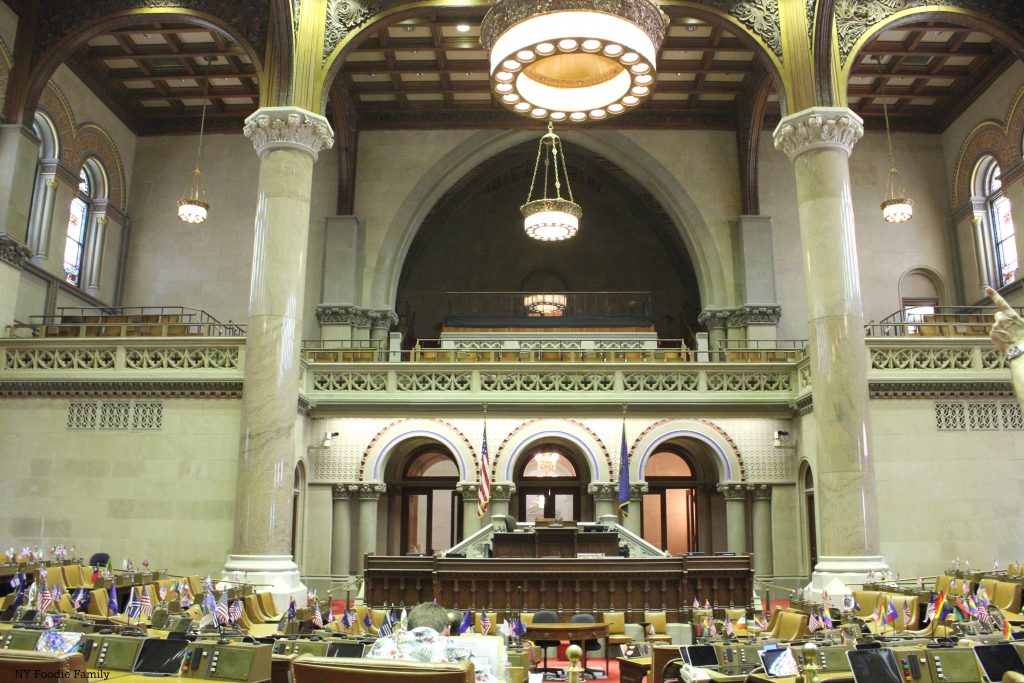 The tour visits both the Assembly and Senate Chambers.  The Assembly Chamber, pictured above, is the largest room in the Capitol.  The 150 members of the Assembly vote on approximately 2,000 bills and resolutions a year using an electronic voting system. 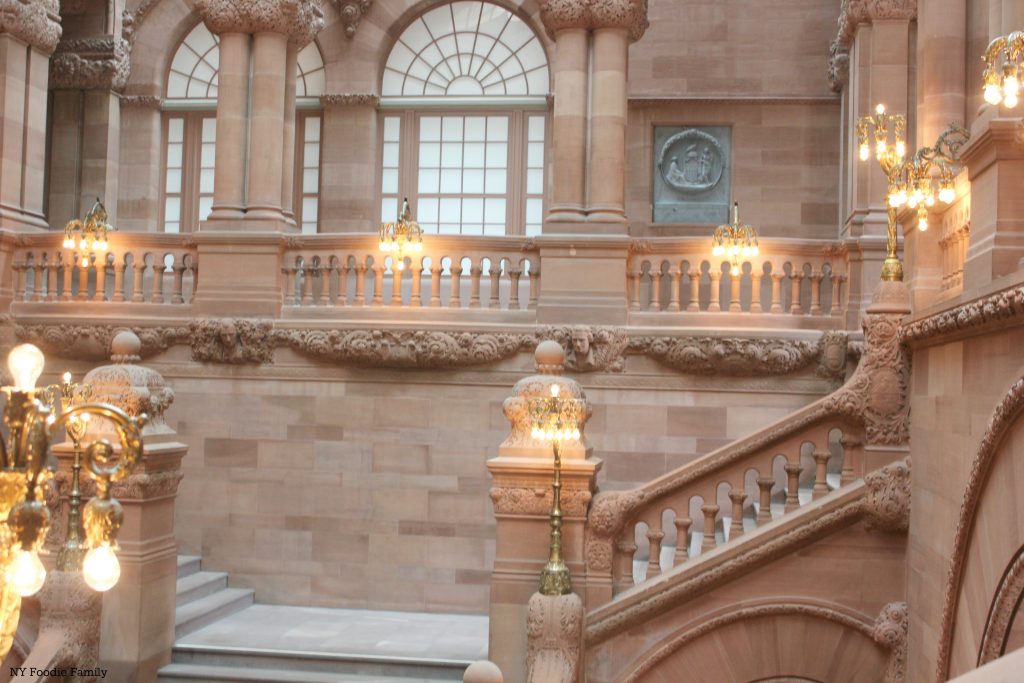 My favorite part of the tour was seeing the staircases.  The Capitol has three major staircases that are the most beautiful that I think I’ve ever seen in-person.  This staircase is the Great Western Staircase, also known as the Million Dollar Staircase.  After fourteen years, construction of the staircase was completed in 1897. The staircase cost over $1 million dollars to build and employed over 500 stone cutters and carvers.  Carved into the staircases are the faces of 77 famous people including George Washington, Alexander Hamilton and Susan B. Anthony. 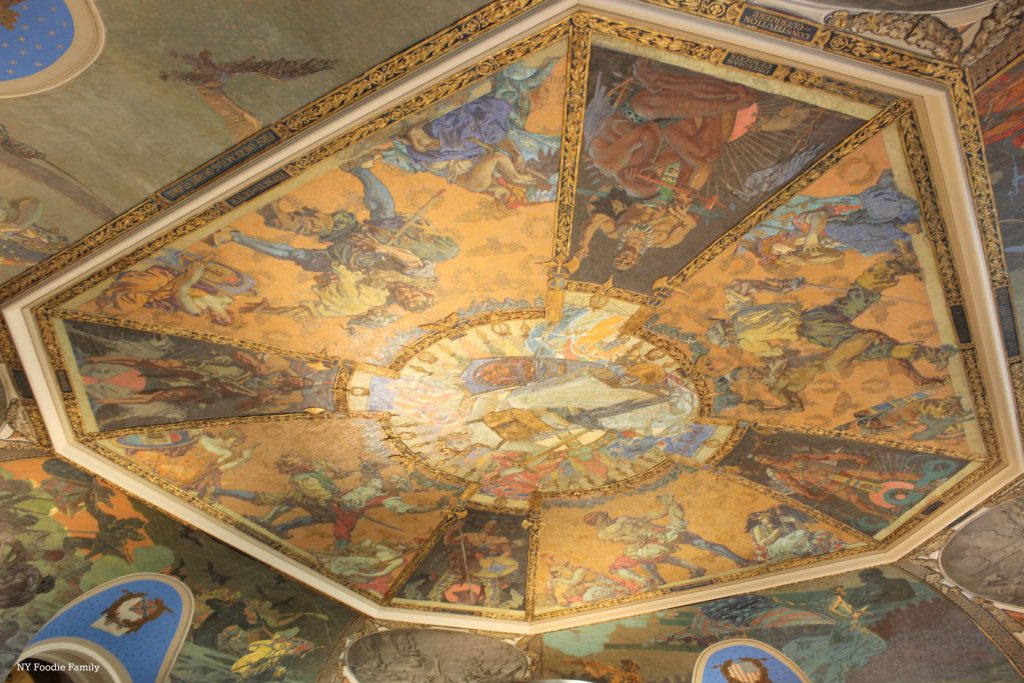 Near the end of the tour we visited the War Room.  The ceiling murals depict important events in the state’s military history.  Located next to the War Room is the Hall of Governors, where portraits of New York’s 56 governors are displayed.  Our tour ended here with the option of independently touring the hall.

The Capitol also has a haunted history.  Nightwatchman, Samuel Abbot, died in the 1911 Capitol fire, but his spirit allegedly remains in the building.  We saw the demon that a disgruntled worker carved into stone.  In October, special Capitol Hauntings Tours take place, where those interested can learn more about the spooky legends of the building.

While I enjoyed the tour of the Capitol, the 60 minute tour was a bit much for my kids although they admired the beauty of the building. The information correlates so well with what they have been learning in school. However, I think the tour would be better appreciated if they were older.

Parking:  Metered street parking is available or there are several parking garages located throughout the surrounding area.  The V-Lot is located underneath the Empire State Plaza with a $10 fee before 11 AM or $5 fee after.

Weekday Walk-in Tours:  Free tours are given at 10 AM, 12 PM, 2 PM and 3 PM, sign-up at the Lobby.  Reservations are not required unless you have a party of 10 or more.  Visitors are welcome to take self-guided tours during building hours.