This Wednesday, July 15th, you can enjoy the second of five weeks of “A Night at the Drive-In.” This FREE summer movie series is hosted by Michael B. Jordan, most recently of Creed and Black Panther fame, and Amazon Studios. Hudson Valley locals can enjoy viewing these movies at the Overlook Drive-In in Poughkeepsie. Every other Wednesday there is a double-feature screening of movies that celebrate, “diverse voices in cinemas.”

Tickets are free but must be reserved and printed here in advance and shown at the gate. Although the movie screening doesn’t begin until 8:50 PM, you can arrive earlier to stake out a good parking spot. Gates open at 7 PM. You can either pack some dinner and snacks or purchase them at the snack bar. Burgers, hot dogs, pizza, chicken tenders, nachos, fries, pretzels, ice cream and more are available.

This is a fun summer evening out where social distancing can be practiced. Movie ratings vary and parental discretion is advised.

Although the series started July 1st, here is the schedule for the rest of the summer:

*Please note that the Overlook Drive-In policy requires all visitors to wear a face mask for entry.

Many children’s movies premiered over the summer, when the kids were home from school.  We saw The Secret Life of Pets in the theater, but Finding Dory, The BFG, Angry Birds and Captain America: Civil War were also all playing this summer.  If your kids, like mine, are movie lovers, have no fear!  There are plenty of movies coming out this fall that will interest your tweens.  Check out this round up of some of the movies my kids are most interested in seeing:

Middle School:  The Worst Years of My Life (October 7, 2016)  – We own and both my kids have read James Patterson’s book (with the same title) that this movie is based on. I know that when the movie comes out in October that they will want to see it.  So, I have to read this book ASAP!  This movie tells the story of Rafe Khatchadorian who is tired of all the rules at his middle school.  He and his friends come up with a plan to break every school rule.  You may want your child to read the book before seeing the movie.  If they enjoy it, there are currently eight other books in the Middle School series.

Trolls (November 4, 2016) –  This is DreamWorks Animation’s newest animated film.  In this movie, trolls Branch and Poppy embark on a journey to save their town from the Bergens.  I’m excited that characters are voiced by Anna Kendrick and Justin Timberlake (two of my faves!) as well as Zooey Deschanel, Russell Brand, Gwen Stefani and James Corden.  Besides the regular movie merchandising, I’m sure troll dolls, popular back when I was a child, will likely be making a comeback with the arrival of this movie.

Rogue One:  A Star Wars Story (December 16, 2016) – This is the movie that my son (and husband) are probably most excited about seeing this year!  This is the first Star Wars stand-alone film, in which a group of Rebel spies attempt to steal the plans for the Death Star.

Sing (December 21, 2016) – This animated movie features Buster, a koala, who hosts a singing competition to drum up business for his theater.  The characters are voiced by a cast including Scarlett Johansson, Matthew McConaughey, Nick Kroll and Reese Witherspoon.   Ever since we saw previews of this movie over the summer, my son is excited to see it!

Other movies coming out this fall that your children may be interested in include:


The Wild Life (September 9) – This animated movie was originally titled Robinson Crusoe.  As the original title suggests, this movie, based on the book by Daniel Defoe tells the tale of how Crusoe came to be stranded on a tropical island.

The Queen of Katwe (September 23) – This movie is based on the biography of Phiona Mutesi, written by Tim Crothers.  Mutesi is a child from Uganda who is trained to be a chess champion.  This looks like a feel-good family movie, which will surely appeal to chess players of all ages.

Storks (September 23) – An animated movie about storks who have moved on from delivering babies to packages.  However, they get an order for a baby to be delivered and have to figure out how to do it.  Characters are voiced by stars including Andy Samberg, Jennifer Aniston and Ty Burrell.

Fantastic Beasts and Where to Find Them (November 18) – If your children are Harry Potter fans then you they will want to see this movie!  This movie is based on the book by J.K. Rowling that is a textbook (reference book) of all of the mythical creatures.  We are currently in the middle of reading through the Harry Potter series and will likely wait until we finish the series and read this book before watching it.

Moana (November 23) – This is Disney’s latest animated movie, featuring Moana, a girl who sails the ocean on a journey to help her family.  While we are big Disney movie fans, we will most likely wait to see this one on DVD. 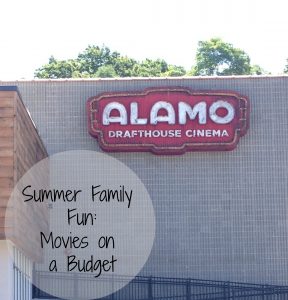 Summer vacation is quickly approaching!  My kids have opted not to go to camp this summer and I am trying to fill up our calendar with fun activities.  Who doesn’t love movies?!! As much as our family loves going to the movies, I don’t love the cost of taking our family of four to go see one!  Four tickets and a large popcorn and soda later and we’ve spent close to $75!   However, summer is the perfect time for me to take the kids to the movies.   We get to escape the heat for a couple of hours and get to see a movie on the big screen.  If you’re looking for the most recent blockbuster release, then you might want to stop reading here.  If you’re like my kids, who don’t mind seeing older movies that they might have already seen, then keep reading, because I’ve found some summer movie deals!

Alamo Drafthouse Kids Camp – Movie and restaurant chain Alamo Drafthouse is again offering their Kids Camp.  You choose your ticket price between $1 – $3 and all proceeds get donated to a local nonprofit.   The movies offered this summer include classics like A League of Their Own and Babe, as well as older, but more recent films like The Lego Movie and Shaun the Sheep.

Regal Cinemas Summer Movie Express – Regal Cinemas offers movies every Tuesday and Wednesday at 10 AM for only $1 each.  Two movies are offered each week and both movies play on both days.  So if you really wanted to, you could go to the movies twice each week!  Sitting in an air conditioned theater watching a popular family fun movie for $1 is my kind of movie fun!  This summer’s movie line up includes Goosebumps, The Smurfs 2, Home, The Peanuts Movie and many more.

Local Movie Viewings – Check your town’s recreation department website, or local neighboring towns, to see if they are offering free “Movies Under the Stars” night.  Several towns in our area offer such a night.  Bring a blanket or some chairs and some snacks and you can have yourself a free family movie night.  Just don’t forget the bug spray!

Drive-In – Nothing says summer to me more than a drive-in movie theater.  Do a quick internet search for your nearest drive-in movie theater.  If it’s a bit of a drive, possibly make a day of it and go out to lunch or dinner, see if there’s a local park and then go watch the movie.  Or, if you are taking a summer vacation, see if there’s a drive-in theater near your destination.  Drive-in theaters often play current releases and often have discount nights or special deals going on.

COOK: Homemade pizza is a go-to dinner for us and

TO DO: {New Hampton} Is it even fall if you don’

TO DO: {Hyde Park} Llama and Alpaca Hike at @clove

EAT: {Lagrangeville} Is there ever a bad time to e

EAT/DRINK: {Beacon} Sadly, on a recent trip to Bea

COOK: I’m holding onto summer for as long as I

EAT: {Jefferson Valley/Fishkill} When we asked the

TO DO {Pleasant Valley} Enjoying the long weekend