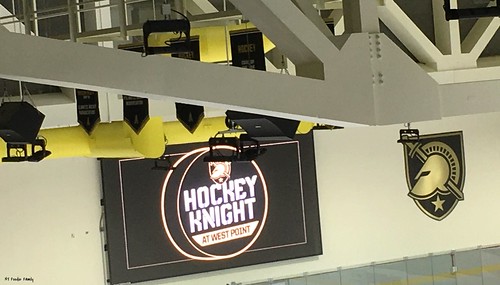 Living in northern Westchester County, we are fortunate to be so close to West Point Military Academy.  Besides being a top tier educational institution, West Point is home to some pretty competitive sports teams.  This past Saturday evening, our family visited West Point to spend a night with the Black Nights ice hockey team.  This was the first time that either my husband or kids had ever been to an ice hockey game.

Attending an ice hockey game was my husband’s winter family bucket list item.  We decided to go see a West Point hockey game, since they play so close to home.  After referencing our calendar, we picked a date and purchased our tickets online via the Army Hockey website.

Tate Rink is located inside the 131,000 square foot Holleder Center.   There are multiple entrances to the building. We parked in the F lot, where there are stairs that lead directly down to the center.  Our tickets had an 8:00 PM start time printed on them.  Luckily, we arrived at the rink around 7:15 PM, thinking we were early.  We discovered that the game had started at 7 PM and we had missed almost the entire first period! 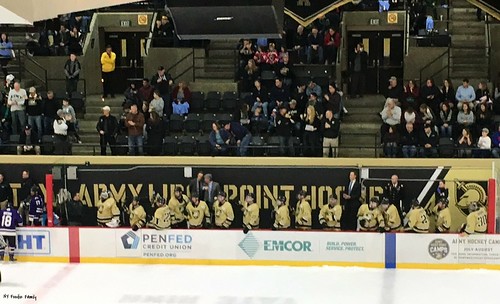 We had purchased $15 bleacher seats that were three rows from being the last seats.  Although our seats were high up, literally almost in the rafters, I thought we had a great view of the game. 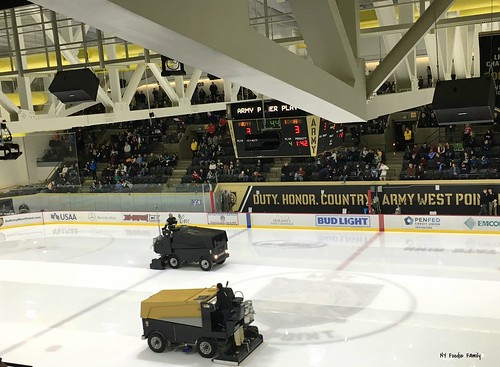 For those unfamiliar with ice hockey, like I was, two teams of 5 players, plus the goalie are on the ice at a time.  The game consists of three, 20-minute periods.  With time outs, ref calls, etc. and zambonis resurfacing the ice in between each period, expect to be at a game for more than the 60 minutes of active play time. 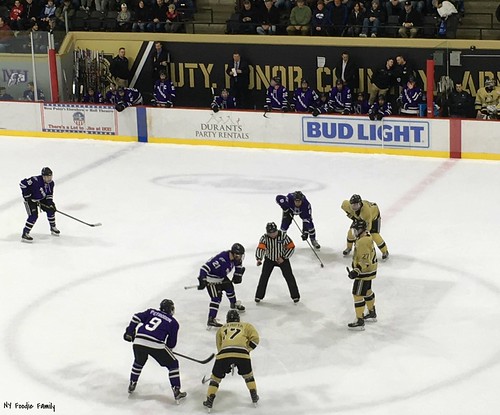 The evening that we attended, the Black Knights were playing Niagara University.  The game was fast-paced and exciting. I was a bit surprised at how aggressive the players were and several fights occurred throughout the game. At various times throughout the game the penalty box was occupied by players from both teams! 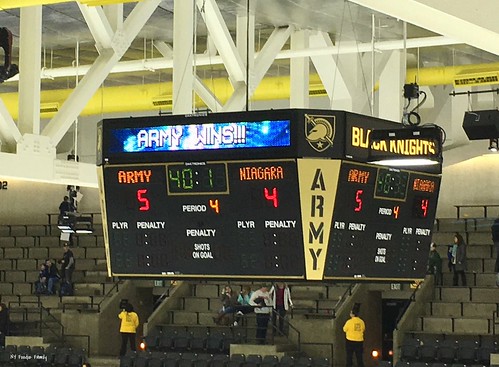 During the game we saw, breaks in the playing time were filled with upbeat music, an emoji camera (requesting you to flex for the cam!) and more!

These two particular teams were pretty well matched and the game went into a five minute overtime, after the third period ended in a 4-4 tie.  With less than 41 seconds remaining on the clock,  Conor Andrle scored a goal, clinching a win for the Black Knights! 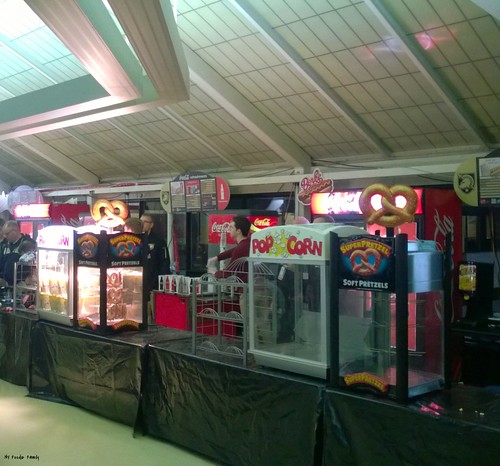 Thinking we were seeing a late game (8 PM) we ate dinner before we arrived at the rink.  However, there are concession stands selling food and beverages.

Overall, we had a great time seeing the Black Knights hockey team play.  I am looking forward to attending another game or two next year!

I highly recommend attending local college and or minor league sports events with your family.  They are an affordable night of family fun and are a great introduction to sporting events for kids.

The Black Knights hockey season is usually from October through February.

When:  There are still two home games, February 18 and February 25.

Getting There:  Take 9W north to 218.  (the first exit that notes West Point) The entrance to West Point is directly across the exit ramp.  Be prepared for the driver of the vehicle to show picture ID and have your car trunk searched.

Parking:  Free parking is available in the A or F lots. 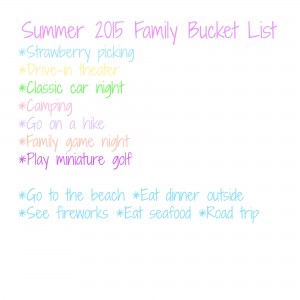 Yesterday was the official first day of summer.  As the kids finish up their last week of school we have made our summer bucket list.  Making a summer bucket list is a fun way for us all to choose something that we want to do together.  Our family time is limited so it’s nice to have a plan of what we want to accomplish.  Plus, having our list in writing makes us more accountable to actually accomplishing it!

Strawberry Picking – This was something we had been meaning to do for awhile and we finally went strawberry picking a few weeks ago.  It’s kind of cheating to put it on our “summer” bucket list, since we technically didn’t go during summer.  However, there’s a limited window of opportunity for strawberry picking in our area (around the first week or two in June) and it just seems like a summer-time activity!

Drive-In Movie Theater – I discovered that there’s a drive-in movie theater about an hour a way from our house.  I think it will be fun to be able to watch a together in the car.  We can possibly bring dinner and some treats and have a different family movie night experience.

Classic Car Night – The Weekend Chef would like us to go to a Classic Car Night show.  It may end up being the local show held out in the McDonald’s parking lot, unless we can find a bigger one not too far away.

Camping – My daughter wants to go camping this summer and we already have our weekend in July blocked out.  Now, it’s just a matter of choosing the where!

Go On a Hike –   My son’s first response to what he wanted to do this summer was go on a hike.  While I first said maybe we can put this on our fall bucket list I decided to add it.  Maybe we can go on a night hike or hike on a not-so-hot day.  Since this was his first choice, we are going to do it.

Family Game Night – This was my son’s alternate response.  He suggested that maybe we can play soccer or volleyball together.  Or play games inside.  We enjoy family game nights so I am adding it to the list.

Play Miniature Golf – This is an activity that we don’t get to do very often but the kids love.  Hopefully we can get a round or two in this summer!

Finally, the bottom of our list are activities that are already planned.  Going to the beach, eating seafood, fishing, and eating dinner outside are all activities that we usually end up doing during our annual Rhode Island 4th of July vacation.  We are driving to Disney this summer which takes care of the road trip and I’m sure we’ll be seeing a fireworks show or two down there!

What are some activities on your summer bucket list?