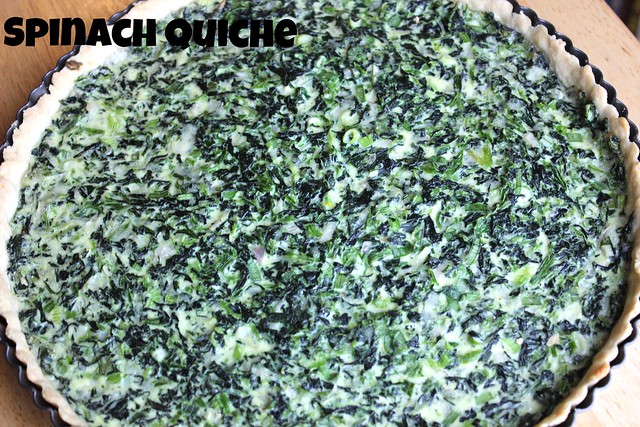 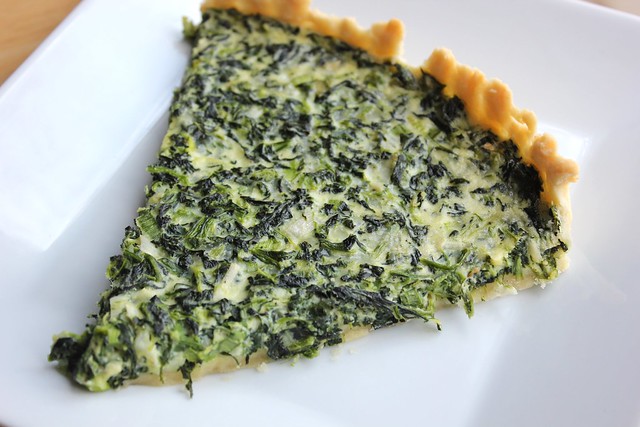 We are a bit behind in our posting, but March’s Supper Club theme was appropriately themed “green.”  While I made Copycat Cheesecake Factory Avocado Eggrolls, which were a huge FAIL (if pre-making and transporting, they need to be placed on parchment paper and floured or else, they might just stick to the cookie sheet (even though we floured it) and rip and tear and have all the filling fall out, prior to attempting to deep-fry!), the Weekend Chef made this spinach quiche.  When our daughter found out that our supper club theme was “Green”, she suggested to the Weekend Chef that he make a spinach pie…..and so, he went with it.  He even ran out to Marshalls and bought a special French quiche pan to make this in!  Please note that the original recipe calls for a 9-inch pan.  The Weekend Chef realized he bought a 12-inch pan as he was laying the dough in it, so the crust was a bit thinner than in the recipe.  Even though this recipe used only a couple of simple ingredients, it was flavorful and enjoyed by all.  Leftovers were great for breakfast the next day!

Directions:
1. Place the flour, salt, and sugar in the bowl of a food processor, and process for a few seconds to combine. Add the butter, and process until the mixture resembles coarse meal, about 10 seconds. With the machine running, add the ice water in a slow, steady stream, through the feed tube, just until the dough holds together. Do not process for more than 30 seconds.

2.  Turn the dough out onto a floured work surface. Divide in two. Place each half on a sheet of plastic wrap. Flatten, and form two discs. Wrap, and refrigerate at least 1 hour before using. Can be refrigerated overnight.

Directions:
Preheat oven to 425°. Beat cream cheese in medium bowl until smooth. Gradually beat in half and half and eggs. Mix in remaining ingredients. Evenly press one round of the dough into a quiche pan or similar low metal or glass baking dish. Pour filling mixture into unbaked crust. Bake until crust is golden brown and filling is set, about 25 minutes. Cool at least 10 minutes before serving. Can be served at room temperature.

TO DO: {Esopus} Back at the end of November we vis

TO EAT: {Shrub Oak} Did you celebrate #nationalbag

TO READ: The Tourist Attraction by @sarahmorgentha

This past weekend we went snow tubing at @windhamm