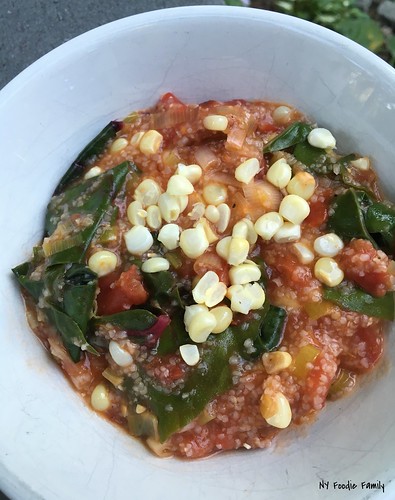 In this week’s CSA challenge I am spotlighting leeks.  Leeks look like long, thick scallions and are related to onions, shallots and scallions.  However, they have a milder flavor than onions.  Leeks need to be cleaned really well, as they grow in sandy soil, which tends to collect among the layers.  In this recipe, to prepare the leeks, I chopped the tops and ends off.  Then I made a cut down the length of the leek, sliced it and then rinsed them in a bowl of water.

To showcase the leeks I made Spicy Grits with Chorizo, Leeks and Corn.  I have recently come to like grits, especially with cheese!  The kids were visiting their grandparents for a few days and since they don’t like grits, I thought it was a perfect time to make this recipe.  This recipe is versatile, in that you can substitute different vegetables.  I used Swiss chard in place of the spinach the original recipe called for.  I think adding some sautéed zucchini would be tasty as well!

2. Add the leeks and garlic , cooking for approximately 3-4 minutes until leeks start to soften.

4.  Stir in the grits.  Reduce heat to medium low and cook, stirring often until grits are tender and slightly thickened.  (While the original recipe noted about 10 minutes, it took at least 20 minutes for my grits to thicken).