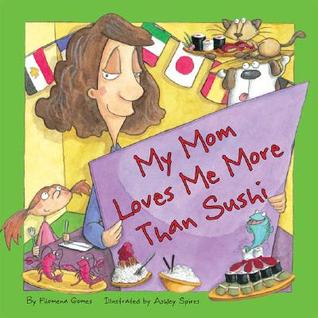 My Mom Loves Me More Than Sushi by Filomena Gomes
Rating:  4 out of 5 stars

This picture book is a great way to  introduce children (and adults!) to different foods from around the world.  The little girl who narrates the story tells the reader that her mom loves her more than ____ (a different food around the world).  Each food named (sushi, biscotti, samosas, etc.) has an illustration of what the food looks like and a little, white flag with the name of the country it comes from.  For the most part, the foods are described well enough for the reader to get an idea of what the food is.  A map in the beginning and end of the book illustrates where each of the foods mentioned in the book comes from.  I see this book as being a great starting off point in cooking and trying new foods.  “Remember the biscotti from Italy that the girl and her mom ate?  Why don’t we try some?!”  There were foods mentioned in the book that I was unfamiliar with like canja and megadarra.  This book is illustrated, but could me more interesting and educational if actual photographs of the food were shown as well as flags of the different countries.