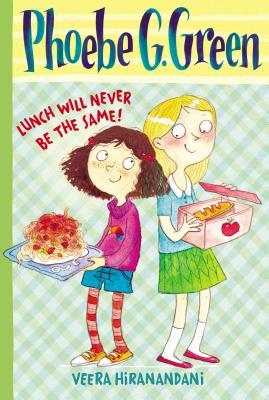 Lunch Will Never Be The Same (Phoebe G. Green series #1) by Veera Hiranandani
Rating:  3 out of 5 stars

Phoebe G. Green is a relatively new chapter book series, with this first book published in October of 2014.  Phoebe is a third grader who likes to make lists.  She meets a new girl in her class, Camille, who is from France.  Camille’s father is a pastry chef and Phoebe becomes intrigued with the interesting lunches that Camille brings to school:  beet salad with goat cheese, butter lettuce salad with duck, chickpea salad with red peppers and cilantro and more.  Phoebe’s family eats the same thing every week: spaghetti on Mondays, baked chicken with boxed mashed potatoes on Tuesdays, etc.  Seeing the lunches that Camille brings to school, Phoebe only imagines what dinner at her house must be like.  So, she comes up with a plan to get herself invited to Camille’s for dinner, so she can find out for herself.

This book will introduce your child to all different kinds of food from goat cheese and pakoras (Phoebe’s best friend Sage is Indian and she loves the pakoras that his mom makes) to Beef Bourguignon and Baked Alaska.  This is a book not just about food (though there’s a lot of it mentioned in the book!).  It’s also a tale about friendship and that it’s okay to make new friends and still keep your old friends.  I enjoyed that it was the child in this book trying to get her parents to cook new things, versus the usual parents getting their kids to try new foods.  Both of my kids each read this book on their own and thought it was an okay read.

This book is geared towards readers in early elementary school (grades 1-3) with short chapters and lots of illustrations.