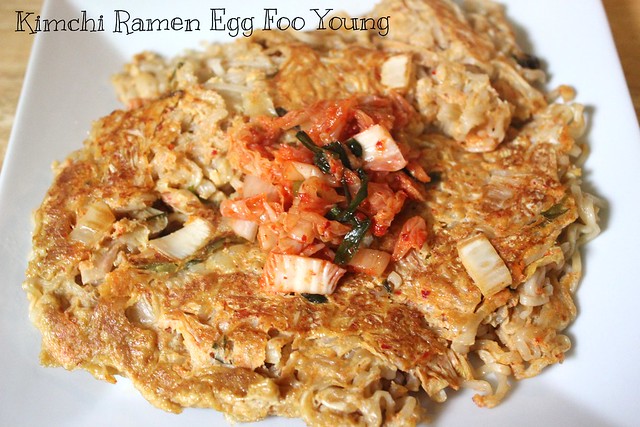 I love Korean food, as I should since I am Korean.  However, I was adopted from South Korea when I was nine months old, so I don’t speak Korean.  As much as I love Korean food, I rarely cook it at home.  I hope to change that in these upcoming months and look forward to cooking more Korean food at home.  I enjoy Mika’s Pantry because Mika adopted a daughter from South Korea and cooks a lot of simple but tasty Korean food.  While I’m not sure she’s actively updating her blog, there are several years of tasty recipes available.  This is a dish that I’ve made a couple of times for the Weekend Chef and I.  Kimchi is still a bit spicy for the kids!  I usually buy kimchi at our “local” H-Mart (if you call local 45 minutes away – but it’s a huge Asian food market!).  However, I have seen kimchi recipes around the internet and hope to try my hand at making some soon!  For those unfamiliar, kimchi is a Korean fermented spicy cabbage dish.  It’s allegedly one of the world’s healthiest foods and Koreans eat on average forty pounds of the stuff per person each a year!  The original recipe called for scallions, which I didn’t have, but think would add some great flavor to this dish and will add the next time I make this.  You may want to add even less than the recommended seasoning packet, as those seasoning packets are very salty.  This is a super easy and super cheap dish to make if you like kimchi!

Directions:
1. Cook ramen noodles in boiling water for 3 minutes then rinse, drain and set aside.

3. Melt butter in nonstick skillet on med-high heat and add drained noodles. Let brown for a couple of minutes (without stirring) before adding the egg mixture. Cook until egg is set enough to flip, about 2 minutes.  Flip the patty over and cook until egg is set, about a minute more.

***It is suggested that you serve this with Cantonese Brown Sauce and additional Kimchi.  I found this tasty enough without the brown sauce.