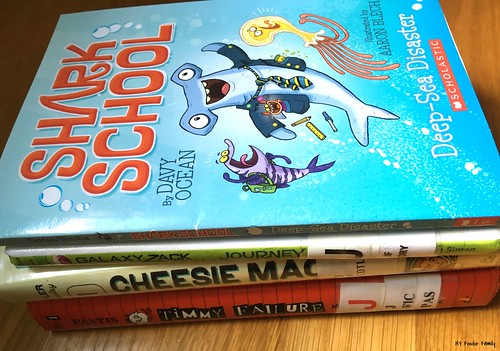 I do a monthly post and join a link up each month sharing the books that I’ve read in the previous month.  My kids are voracious readers (I wonder where they got that from?!) and I thought that I’d write a monthly post sharing the books that they’ve been reading each month.  My son will be eight next month but is an advanced reader.  He reads a variety of books but especially enjoys graphic novels, the Jedi Academy and the Origami Yoda series and the Diary of a Wimpy Kids series.  To expand his reading, I often put a bunch of books that I think may interest on hold at the library.  He can then give the books a try and any he doesn’t like we send back.  Here are some of his June 2016 reads.

Cheesie Mack Is Not a Genius or Anything by Steve Cotler – This is the first book in a five book series.  Ronald “Cheesie” Mack is a soon-to-be sixth grader.  In this book, he tells stories about his graduation, his older sister, June (who he calls Goon), his best friend Georgie and more.   This series is targeted for readers ages 8-12.

The kid’s thoughts:  I liked this book because Cheesie makes up his own words like splenderful and invents sandwiches like the BLART (Bacon, Lettuce, Avocado, Ranch and Tomatoes).    This book is full of adventure so I recommend it if you like adventure.

Galaxy Zack:  Journey to Juno by Ray O’Ryan – This is the second book in the Galaxy Zack series, which my son is enjoying.  In this book Zack goes on a trip to Juno with the Explorer’s Club.  Zack gets partnered with Seth Stevens, the class bully.  They are supposed to be taking photos and videos of the cool things that they find on Juno.  However, Seth leaves Zack to do all of the work.  Zack ends up discovering a galaxy gemmite, a powerful crystal, but doesn’t want Seth to get any credit for the discovery.  He of course ends up having a change of heart.  This series is recommended for readers ages 5-8.  It is filled with lots of illustrations and short chapters.

The Kid’s thoughts:  I liked this book.  I’ve already read the first book Hello, Nebulon and like this series since it’s about beautiful, make-believe planets .  There is cool technology in this like Zack’s house assistant, IRA (Indoor Robotic Assistant).  For dinner they don’t have to cook anything, they just say what they want and it magically comes out of the wall.  I am getting ready to read the next book in the series.

Shark School:  Deep-Sea Disaster by Davy Ocean – My son received this book as an end-of-year gift from his second grade teacher.  This book is about Harry Hammer, a hammerhead shark that wants to be cool like famous sea wrestler Gregor the Gnasher.  On a class trip to a shipwreck, the class gets trapped and Harry ends up helping out.  This book is the first in a series of seven.  It is illustrated and is recommended for readers ages 6-9.

The Kid’s thoughts:  I liked it because there were funny parts, like when Harry tries to beat Rick to the classroom and the door’s closed and he hits the door.  I agree with the sea creatures in Harry’s class that the Great White Shark is the coolest shark in the ocean.  I liked Harry because he’s serious and stands up for other people.  I liked this book and want to read more of the series.

Timmy Failure:  Mistakes were Made by Stephan Pastis – When you’re perusing books at the library and the cover of this book has Diary of a Wimpy Kid author noting that Timmy Failure is a winner, you have to give it a try! This is the first in a five book series, targeted toward middle grade readers.  Although the book has 294 pages, it has very short chapters and many are filled with illustrations and cartoons.  Timmy has a detective agency, Total Failure, Inc. and a pet polar bear named Total.  Throughout the book, Timmy works on three different cases. I perused the first couple chapters of this book, which were humorous, but not such that I think my almost eight year old understands it.  I also noted a large number of words that my son probably doesn’t understand.

The kid’s thoughts: I liked this book because it’s funny.  Total the polar bear acts crazy and is funny.  He’s my favorite character.  I liked the illustrations in the book.  There were some words that I didn’t know but I could still understand what was going on in the book.  I would recommend this book to kids who like detective stories.

Zac Power Mind Games by H.I. Larry – I had put this book on hold for my son, not realizing that it was the third book in the series.  This series features 12 year old Zac Power,  a spy for the Government Investigation Bureau (GIB).  In this book his mission is to locate hackers trying to access WorldEye, GIB’s satellite system.  A lot of cool technology and gadgets are featured in this book, which appealed to my son (see below).  This is a futuristic fantasy book with a focus on video games.  This series is targeted towards readers ages 8-11 and will appeal to those who enjoy action and adventure.  My son liked this book enough to request the first book in the series.

The kid’s thoughts:  In my son’s words, “this book was okay.” He likes that Zac Power is a spy and he likes the different gadgets that Zac uses during his mission, like the karaoke scooter and the stink bomb (the 10,000 dog farts setting definitely appealed to my son’s sense of humor!).