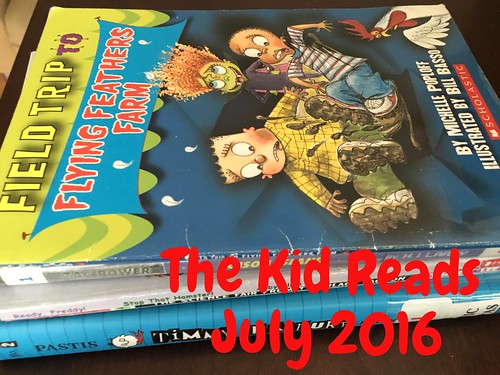 Welcome to The Kid Reads July 2016 edition.  The summer has provided lots of reading time for my 8 year-old son, a.k.a. “The Kid.”  We’ve been making weekly visits to the library where he has been choosing lots of books to read.  I’ve also been trying to get him to read some of the books off of our own bookshelves so I can donate them once he’s finished.  Here’s a look at what he’s been reading this month:

Cheesie Mack is Cool in a Duel by Steve Cotler – This is the second book in the Cheesie Mack series.  You can read our review of the first book in the Kid’s June book post.  Cheesie will be starting sixth grade in the fall.  He loves making lists.  In this book Cheesie and his best friend Georgie are headed off to sleep away camp in Maine.  In error, Cheesie and Georgie are placed in a cabin with the older boys, including Kevin, the boyfriend of Cheesie’s sister, June (“Goon”).  Tired of Kevin’s bullying, Cheesie challenges him to a Cool Duel.  This book is recommended for readers ages 8-12.  There are 15 chapters with very few illustrations.  There are several points in this book where Cotler breaks down the so-called fourth wall and has Cheesie directing questions to the readers.

The Kid’s Review: I liked this book because it’s funny.   I like the spitball game that Cheesie and his friend’s play on the bus.  Cheese is a good character because he tries to stop bullying at camp.  My favorite part was the talent show because Cheesie makes a really creative project.  I would recommend this book to someone who can read long chapter books.  It’s 229 pages!

Field Trip to Flying Feathers Farm by Michelle Poploff –  Mrs. Bono’s class has been invited to Flying Feathers Farm.  They take a field trip to the farm where they learn about the different farm animals.  Wanda spends the time there searching for a special animal ,but will she find it?  This book is six short chapters with lots of illustrations.

The Kid’s Review:  I thought this was a fun book.  It had lots of jokes and the characters are monsters.

Missing Monkey! (Good Crooks Book One) by Mary Amato – This is a mystery series geared towards readers in 2nd – 4th grade.  Twins Billy and Jillian are the children of criminals.  Their parents want them to follow in their footsteps and in this book, their parents end up stealing a monkey from the zoo.  Billy and Jillian feel bad about the theft and try to find a way to return it, but a series of unfortunate events occurs.  This book has 14 chapters with some Secret Extras at the end.  There are small illustrations every few pages.

The Kid’s Review: I liked this book because Billy and Jillian don’t want to be bad like their parents.  They do good deeds.

Now Look What You’ve Done (Timmy Failure #2) by Stephen Pastis – The Kid read the first book in the series, Mistakes were Made last month.  In this sequel, Timmy Failure continues his work solving cases at his detective agency, this time with the help of Aunt Colander.  He wants to enter a detective contest at school to win $500.  However, a series of unfortunate (but according to the Kid, humorous) events prevents him from entering.  This book is recommended for readers ages 8-12.

The Kid’s Review:  I  liked this book because it is super funny.  Timmy is a good detective who solves his cases.  In this book Total, Timmy’s polar bear, does things that Timmy does not like.  This is why Timmy makes the Lazy Bear 2000.  If you like funny books, then you should read this one!

Poison Island (Zac Power #1) by H.I. Larry – After I mistakenly borrowed book #3 in the series, Mind Games, my son requested the first book to read.  This series is about Zac and his family, who are ass spies and work for the Government Investigation Bureau (GIB). In this book, Zac Power is sent to Poison Island to track down an enemy scientist.  When his brother is kidnapped, Zac must save him and find Solution X to solve the mission.  This series is recommended for readers ages  8-11.  There are some illustrations throughout the book.

The Kid’s Review:  I liked this book because there are lots of cool spy things like Tramp-o-Socks and Eruption Powder.  I liked that Dr. Drastic made a potion that can turn your tongue into a party whistle.  I like Zac Power because he is very smart like me.  I recommend this book to readers who like detective stories.

The Science Fair from the Black Lagoon by Mike Thaler – This is the fourth book in the Black Lagoon Adventure series.  In this book Mrs. Green announces that there is going to be a science fair and everyone has to participate.  Hubie doesn’t know what he is going to do and has nightmares that no one likes his project.  On the day of the science fair, his project ends up being a hit.  This series is recommended for readers ages 7-10.  This book series has short chapters and lots of illustrations.  I read this book and honestly was not impressed.  There are a lot of bad puns and really bad examples of science fair projects.  However, young children may find this book humorous like my son did (see below) and enjoy all the illustrations.

The Kid’s review:  I liked this book because it’s funny.  I liked reading about everyone’s science fair projects.

Stop That Hamster (Ready Freddy! #12) by Abby Klein – This is book number 12 in the Ready Freddy! series.  In this book, Freddy is chosen to take care of Harold, the class hamster.  There is one problem though, Freddy’s mom won’t let him keep it in the house.  Freddy’s friend Robby comes over to help take care of Harold, who ends up escaping from his cage.  Ready Freddy! is a popular series, which is recommended for readers ages 4-8.  My son has read several of the books in the series and has enjoyed them.

The Kid’s Review: I liked this book because I think hamsters are cute and there is a hamster in this book.  Freddy makes Harold a cool Lego rocket ship.

We Meet Again (Timmy Failure #3) by Stephan Pastis – My son has been devouring the Timmy Failure series, with this being the second book in the series that he’s read this month!  This is the third book in the series, in which Timmy has to complete a nature report.  Unfortunately, he is partnered with Corrina Corrina, his biggest enemy.  In this book he is hired to help find the Miracle Report and also deals with his mother dating his baseball coach.  This continues to be an enjoyable series for my son.

The Kid’s Review: I liked this book because it’s about friendship.  Timmy doesn’t like Corrina Corrina in the beginning but they become friends at the end.  Timmy is a good character because he’s funny.