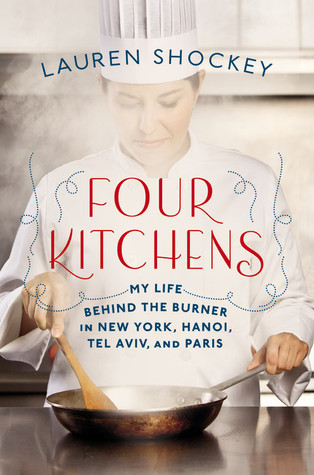 Four Kitchens:  My Life Behind The Burner In New York, Hanoi, Tel Aviv and Paris by Lauren Shockey
Rating:  3 out of 5 stars

If you have ever wondered what it was like working in the kitchen of a restaurant, this book is for you.  After graduating from the French Culinary Institute, author Lauren Shockey apprentices in four very different restaurants around the world.  The book is broken up into four sections documenting her experiences at each restaurant.  Starting at chef Wylie Dufresne’s wd-50, in New York City, she then travels to Hanoi, Vietnam to stage (apprentice) at La Verticale.  After three months in Vietnam, she travels to Tel Aviv, Israel to apprentice at Carmella Bistro.  Finally, she ends her last stage in Paris, France at Senderens.  Each kitchen is very different and so are her experiences in each.  What we do see is the hierarchy of the kitchen and the tedious jobs that apprentices are assigned.  These workers put in twelve plus hour days, sometimes spending hours cutting Brussels sprout leaves or shelling pounds of crabs, only to get up and do it all over again the next day.  Having eaten at wd-50, I found that chapter to be the most interesting.  While many famous chefs don’t tend to be very hands-on in the kitchen, as seen in Shockey’s apprenticeships in Israel and France, Dufresne cooks most nights on the fish line along with his staff.  I enjoyed reading about the molecular gastronomy that went into the preparation of food that I had eaten at wd-50, like the everything bagel and the cold, fried chicken.  Even with language and cultural barriers in Vietnam, Israel and France, Shockey seemed to have successful apprenticeships and forge new friendships with fellow co-workers, roommates and friends of friends.  I found those chapters to be insightful to the culture and food of the respective countries. Shockey provides recipes throughout the book inspired by each restaurant that she staged at.  She also noted that apprenticing taught her more about being a chef than culinary school.  While culinary school may teach you how to cut a carrot, when you work in a restaurant, you will have to learn how to cut the carrot the particular way that chef wants it done.  I found it somewhat difficult to understand how she could afford to spend a year working four, unpaid apprenticeships around the world after spending $40,000 at culinary school.  Then after the whole worldly experience, she realizes that she doesn’t want to work in a kitchen for a living.