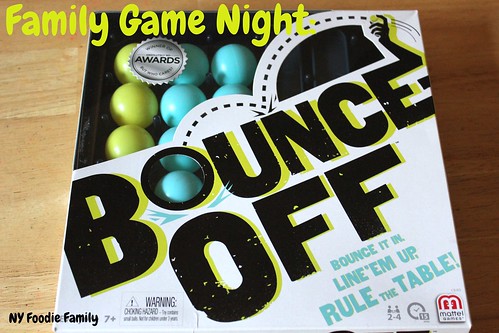 Family game night just got more fun when we recently played Bounce-Off.  My daughter had received this as a birthday present last year and we finally got around to finding some time to play it.  The game is made by Mattel and geared towards players ages 7+.  The game can be played by 2-4 people.  For our family game night we paired up, one child with one parent. 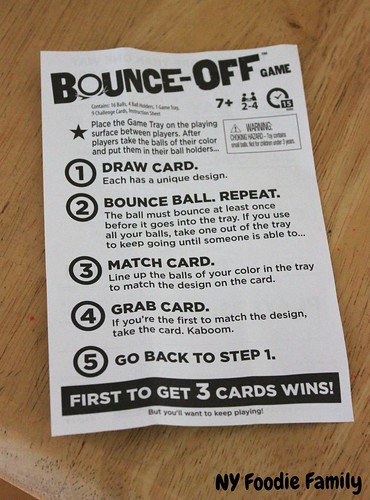 The concept is simple.  As seen above, the directions are short and sweet.  Bounce the colored balls and be the first person/team to make the pattern on the card. 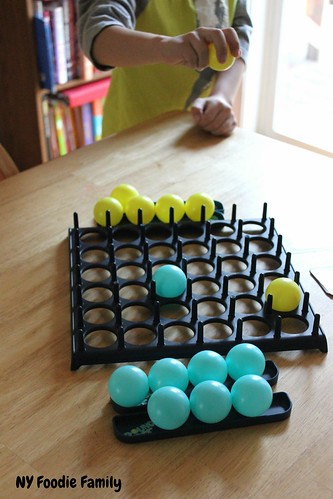 If you make the pattern first, you get the card.  The first player or team to win three cards wins. 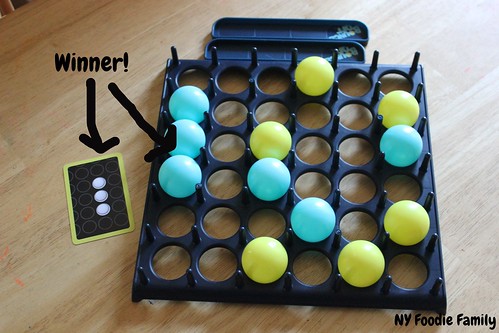 Pros:  This is a fun game.  It’s not a quiet, sit around type of game.  You are sitting or standing and strategizing on where to bounce the balls.  There are two levels of difficulty.  The game contains 9 challenge cards, with 5 easy (yellow cards) and 4 harder (blue cards) for different levels of play.  It’s a quick game.  If you are short on time, you can just play one round.  If you want to make the game longer, you can play all the cards, instead of the winner being the first player to collect three cards.

Cons:  The balls bounce everywhere!  Be ready to catch the balls as they go bouncing off the table.  If you have wooden floors, like us, expect to go chasing after the balls as they bounce and roll.  The game is challenging.  Although it looks easy, bouncing those balls into the patterns on the card is actually more difficult than it appears.
Expect some rounds where no one wins.  Expect that some players may never win any of the cards.  More cards are needed.   The game only comes with 9 cards.  It would be useful to have additional cards available.

Verdict:  Recommend!  Lots of family fun was had by all!  Since we first opened the game we have played several additional times.

We received this game as a gift from a friend.  This game can be found in most stores including Toys R’Us, Walmart, and Target and online at Amazon.com.  We have recently seen the game priced from $12 to $20, depending on the retailer.