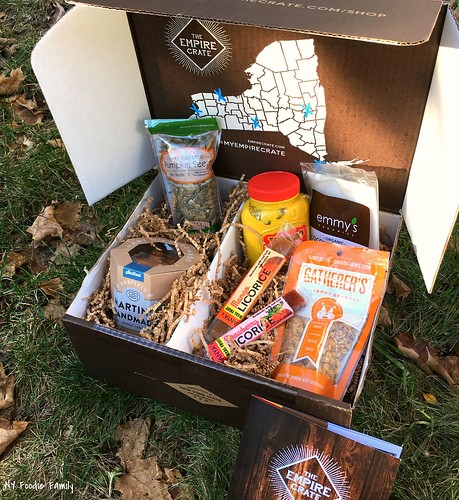 Back in November I won an Empire Crate subscription box.  I was super excited since this monthly subscription box is filled with hand-picked food items from all over New York state.  The box costs $39.95 if doing a month to month subscription.  But they offer a three month and six month prepay option which gives a discount on the subscription price.  Inside the box were six different items (one in two different flavors) as well as an information card about the products and producers.  The inside of the box has a map of New York State with an X showing where in the state the different items in the box were produced.  I received the November 2016 box and this is what was included: 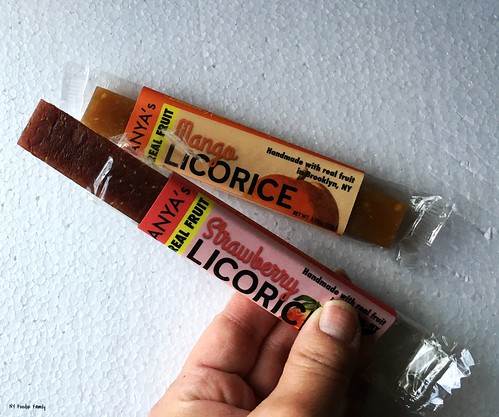 Anya’s Real Fruit Licorice – (2 – 1.13 ounce sticks) In the box we received a Strawberry and Mango flavored licorice bar.  Anya’s licorice is made in Brooklyn, New York.  The candy is made in small batches without preservatives, high fructose corn syrup or artificial colors or flavors.  I’m not a licorice fan but enjoyed this candy.  Neither the strawberry or mango flavored bars had a traditional “licorice” flavor. 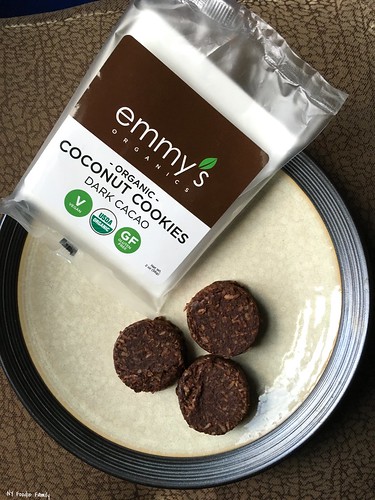 Emmy’s Organics Coconut Cookies –  (2 ounce bag, with 3 cookies) Emmy’s Organics was started by Ian and Samantha in 2009 when they started selling their coconut cookies at the Ithaca Farmer’s Market.  They make several different varieties of coconut cookies including chocolate chip, vanilla bean, raspberry and lemon ginger.  We received the dark cacao variety in the box.  The two ounce bag had three cookies in it.  These cookies are vegan, gluten free and made from organic ingredients as well as fair trade organic cocoa powder.  Unfortunately, I’m not a big coconut fan, unless it’s on a Girl Scout Samoa cookie or in Haagen-Dazs Pineapple Coconut ice cream.  So, these cookies weren’t my thing.  However, my husband and son ate them up! 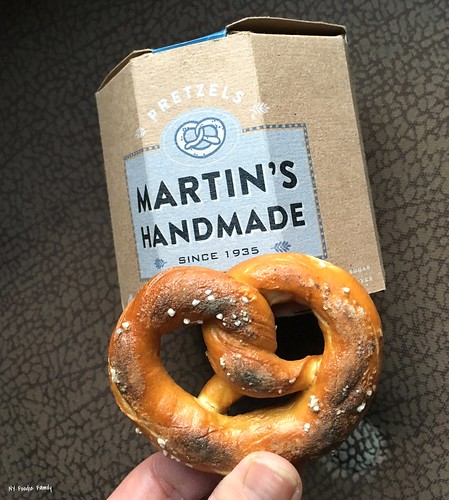 Martin’s Handmade Pretzels –  (box of four pretzels) Martin’s pretzels are handmade using only four ingredients.  These hard pretzels are super light and crunchy.  Four pretzels were included in the box we received.  Unfortunately, all but one (luckily, one was photo-worthy!) were broken in pieces.  From what I’ve read online, the company is based in New York City. However, I believe the pretzels are actually made in Pennsylvania and sold at several NYC Greenmarkets.  Otherwise, you can purchase the pretzels online, where a 3 lb box, available in either whole wheat or traditional costs $14.29.   We thought the pretzels weren’t bad, but probably wouldn’t go out of our way to get them again. 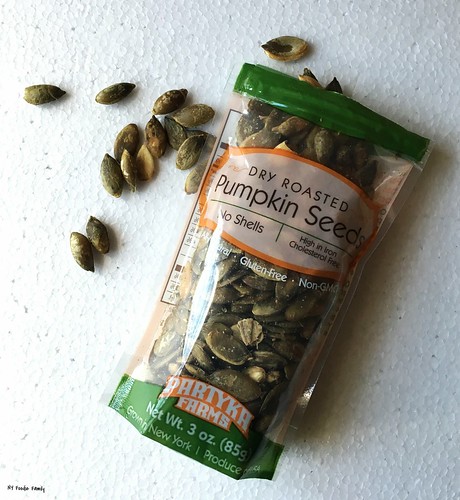 Partyka Farms Pumpkin Seeds – (3 oz. bag) Jeff and Lora Partyka have 900 acres of family farm land in Kendall, New York.  The farm sells fruit and vegetables and has a store that sells baked goods, jellies and of course, their pumpkin seeds.  You can purchase these pumpkin seeds through their website, with a 6 oz. bag costing $3.50 or find them at retailers including Wegmans.  I’ve never been a big seed eater.  However, these lightly salted pumpkin seeds were tasty.  Everyone, including the kids enjoyed eating these! 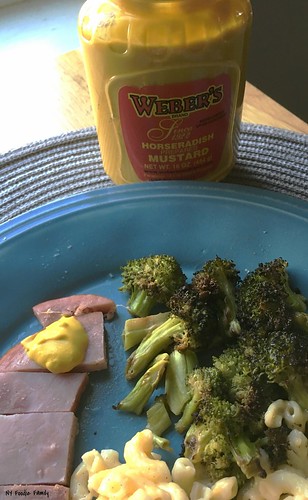 Weber’s Horseradish Mustard – (16 ounce jar) Weber’s has been a family owned and operated company, located in Buffalo, New York since 1922.  According to the Weber website, this horseradish mustard, whose recipe hasn’t changed since it was first created is the number one selling mustard in the Buffalo area.  I don’t eat mustard.  However, my husband and parents really like this mustard.  It has a nice kick from the horseradish but isn’t overly spicy. 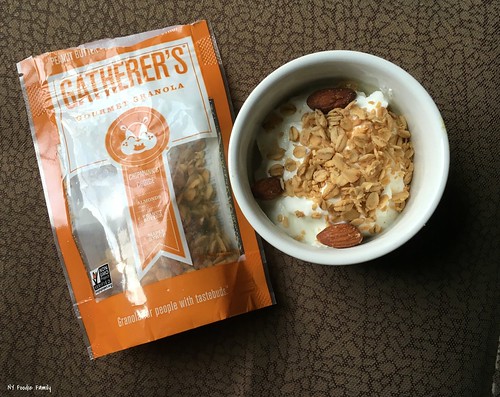 Gatherer’s Gourmet Granola – (bag with 1/2 cup of granola)  Since 2010, Gatherer’s Granola has been making their granola in Schenectady, New York.  The granola comes in six varieties:  Chipmunk’s Choice (almonds, peanut butter, maple syrup), Squirrel Bait (pecans, maple syrup, toasted coconut), Fox’s Fancy (apple, spices, honey) Badger’s Best (coconut, dark chocolate, quinoa), Bee’s Knees (honey, pistachio, walnut) and Turtle Tracks (pecans, dark chocolate, cranberry).  The box contained a sample of Chipmunk’s Choice.  We enjoyed this granola over Greek yogurt. While it is tasty enough to eat on its own, it is very loose, which makes it difficult.  All the granola is made from locally sourced and natural ingredients.  The company offers a subscription service through their website in which you can receive four 9 ounce bags for $19.99 a month (other subscription options are also available) or single 9 ounce bags can be purchased for $5.49 each.  You can also find the granola at select stores and farms throughout the northeast United States.

Overall, my husband and I really enjoyed The Empire Crate subscription box.  We especially liked being able to try products from our home state that we might not have heard of otherwise.  Unfortunately, this box had a lot of items that I personally don’t like (mustard, coconut).  We put a subscription to this box on our Christmas wish list, but no one got it for us.  However, it’s a fun box that we will likely order in the future!