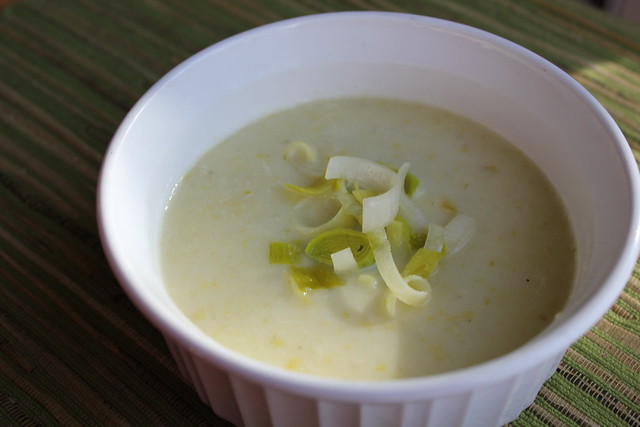 January has a wealth of month long food related celebrations including being National Soup Month.  Soup is perfect for the cold winter days we’ve been experiencing in New York recently. In honor of National Soup Month, I made a Creamy Parsnip Soup.   Parsnips are cream colored root vegetables that are closely related to carrots. They have a sweet, nutty flavor and are high in vitamins, minerals and dietary fiber.  Parsnips, like other root vegetables, are in their peak season Fall through Spring.  We rarely cook with parsnips and the kids did not remember ever trying them, when we told them we were having Creamy Parsnip Soup.  The below recipe uses parsnips, apples, potato and leeks, all of which are in peak season, which makes this a seasonally appropriate soup.  The apples and parsnips give the soup a sweet flavor.  While the kids didn’t love this soup, they both finished their serving.  The adults thought this was tasty.  We served this soup with Italian Herb Muffins to round out the meal.

Pizza Fridays! A night off from cooking is a good

The @bonabonaicecream truck will be at Factoria at

Happy #fryday! Our family loves fries and we had

Tonight’s dinner was so good! I adapted @halfba

Plants and flowers make me so happy! We were glad

Beat the summer heat and cool off indoors at Magaz

Tonight’s dinner was delicious! I made Cauliflo

Hot days need cool drinks! My drink of choice is

We were in Cold Spring today and finally tried Moo