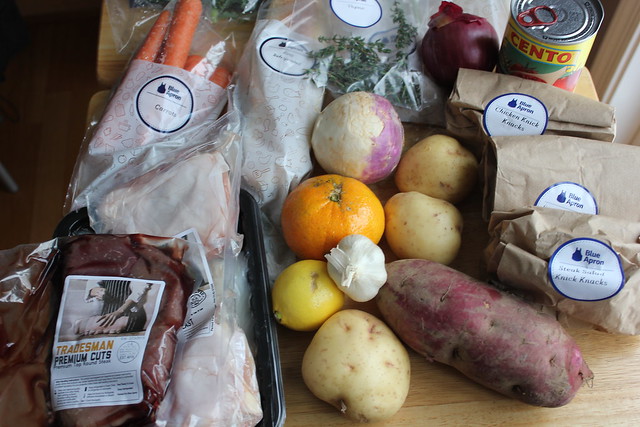 I’m sure by now many of you have heard of meal delivery service Blue Apron.  You may have even tried it.  And if you are like the majority of people I know who have tried it, you like it.  A friend of ours, who uses and loves the meal delivery service, gave us a coupon code to try out a week for free.  Blue Apron offers two plans, a 2-Person Plan or the Family Plan, which is supposed to feed a family of four.   The 2-Person Plan costs $59.94 for three meals.  The Family Plan costs $139.84 for four meals a week or $69.92 for two meals a week.  You can see the menu online a week ahead of delivery and can opt out that week if you’d like. The 2-Person Plan lists six meals on the menu and Blue Apron will deliver three of them, based on your food preference choices.  From the couple of times that I’ve checked out the menu, it appears that three of the meals are vegetarian options.  You don’t get to actually pick the exact three meals that you want though.  The Family Plan only lists four meals a week, so if you order the four meal plan, then you will get all four meals listed.

My coupon code was going to expire and it just so happened that the kids were going to spend a few days with their grandparents.  Since the coupon was good for the 2-Person Plan, or a credit towards the Family Plan, it worked out perfectly for me to try out the 2-Person Plan while they were away.  The box was delivered by about 8 AM on Thursday, my delivery day.   I opened it up and took out the meat and fish which I put in the fridge.  I also put the baguette, which had a “refrigerate” sticker on it, in the refrigerator.  I left the vegetables and bags of Knick Knacks on the counter and then proceeded to my office to begin work for the day. 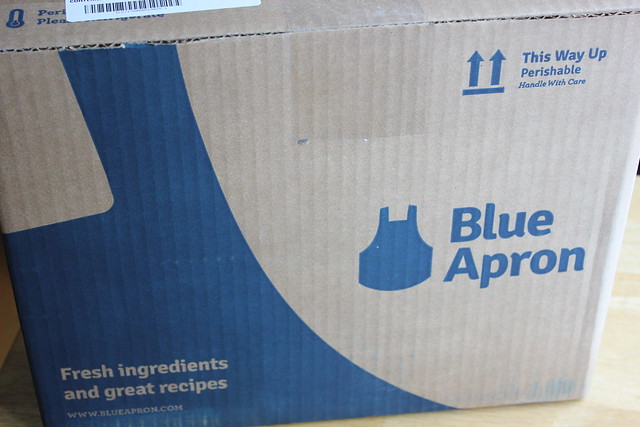 Later that afternoon, after working I came down and started going through the vegetables and recipes.  When opening up a knick knack bag I noticed there was a small bottle of cream and a plastic container of butter!!!  There was no note that there were things in the knick knack bag that needed to be refrigerated!  I ended up throwing those out and used milk and my own butter, for the recipes instead.  I ended up contacting Blue Apron to let them know that they might want to improve their labeling of what needs to be refrigerated and was told that the ingredients in the knick knack bags are listed on the recipe cards.  Sorry I didn’t read through the recipe cards while unpacking the box!  They ended up giving me a $10 credit towards my next delivery…..but unbeknownst to them, there wasn’t going to be another delivery.

The three meals we received in our box was a Bouillabaisse-Style Fish Stew with Fennel, Potatoes & Castelvetrano Olives, Pan-Roasted Chicken with Mashed Potatoes & Maple-Glazed Carrots and Steak & Miso-Roasted Vegetable Salad with Ponzu Dipping Sauce.  The recipes provided are easy to follow.  There are pictures that accompany the instructions that I think are easy enough to follow for even those who are not familiar with cooking. 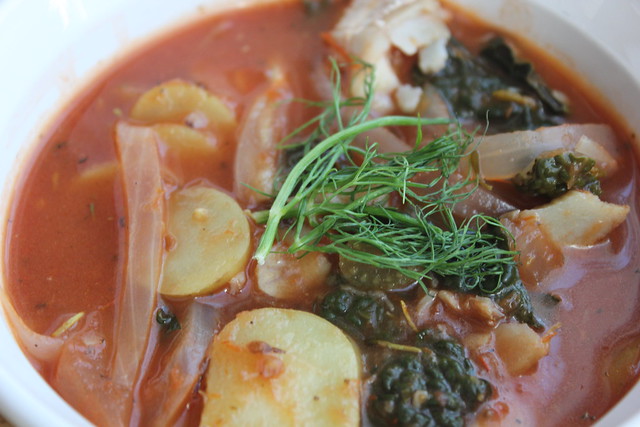 I was a bit disappointed with the recipes.  First, all three had some type of potato in it.  Yes, they differed between Yukon Gold, Japanese Sweet Potatoes and Fingerling Potatoes…..but in a normal week, I would never cook three meals with the same starch.  We didn’t enjoy the Bouillabaisse-Style Fish Stew (pictured above) very much.  It was very heavy on the fennel flavor, which I am not a big fan of, and there were exactly two Castelvetrano Olives (with pits) so there wasn’t much salty, briny, olive flavor.  The chicken and steak weren’t anything special and dishes that we often cook.  I was hoping for dishes that were more unique and interesting.  We did enjoy the miso-roasted vegetable salad that was served with the steak and there was plenty of salad that we had leftovers.

Overall, we were not impressed with Blue Apron and cancelled any subsequent deliveries.  When I checked out the upcoming week’s menu, the Short Rib Burgers on Pretzel Buns sounds awesome!  However, even if I did sign up, there would be no guarantee that I’d get the burgers in my box.

I’m still trying to figure out who this service is for.  It’s not for people who don’t like to cook.  While you get all the ingredients to make the recipes, you’re still spending approximately 30-40 minutes in the kitchen cooking.  It’s definitely not for those on a budget.  $60 for three dinners for two people is not a bargain in my book, unless you tend to eat out frequently.  For our family of four, for three meals a day for a week we spend approximately $150 a week give or take.  For me to spend almost that whole amount for four family size dinners just seems unreasonable to me.  Especially when I’m not even sure the kids will eat the meal.  The upcoming week’s family meals on Blue Apron include Chicken Rollatini alla Cacciatore with Radiatore Pasta, Panko-Crusted Mustard Salmon with Roasted Potatoes and Waldorf-Style Salad, Lamb & Beef Tagine with Swiss Chard, Date Molasses & Whole Wheat Couscous and Vegetable Tortilla Soup with Hominy, Avocado & Queso Fresco.  These don’t seem like the most kid-friendly meals I can think of!  I don’t mind meal-planning.  I try almost five new recipes a week and we often end up with leftovers for lunch.  There are so many awesome recipes out there from blogs, cookbooks and food television that I enjoy picking out the meals that I want to cook.  This service just isn’t a good fit for our family.

So I guess I’ve concluded that the service is for couples (roommates, relatives, basically any combination of 2 people) who like to cook but don’t like to go grocery shopping or meal plan and don’t mind being semi-surprised (since you don’t know for sure what will be in the box!).   If you are busy family and don’t want the hassle of meal-planning and a $140 for four dinners for your family doesn’t seem like a bad deal, you may enjoy a service like Blue Apron.

I highly recommend that you check out the Blue Apron site here to learn more about the service and see if it’s a good fit for you.

If you’ve tried Blue Apron, what are your thoughts and experiences with the service?