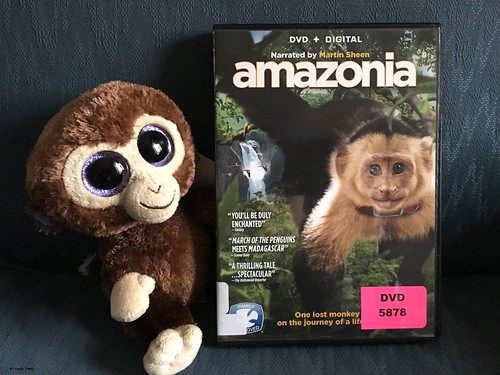 Synopsis from Lionsgate:
Amazonia seamlessly blends thrilling storytelling with breathtaking wildlife photography. As Saï, a tiny capuchin monkey, departs the big city for a new life, his plane is forced to land in the Brazilian rain forest. Abandoned and alone, he forages for food while observing the jungle’s endless varieties of wildlife. As predators approach, Saï’s incredible instincts rescue him from danger at the last minute. One fateful day, he learns he’s not the only capuchin in the Amazon…

Review:  This film follows Sai, a capuchin (a monkey that lives in Central and South America) who is a domesticated monkey, working in a circus.  He’s being transported on a plane when it crashes in the Brazilian rain forest.  The viewer follows Sai as he acclimates to his new environment and learns to survive in the wild.

The film is narrated by Martin Sheen.  Although the film is fictional, lots of factual information about the flora and fauna of the rain forest is presented.  Although this is a fictional movie, it provides lot of useful information about the rain forest.  The scenery is breathtaking with lots of close ups of the various insects and animals that Sai encounters, as well as the Amazon River.

The DVD has special features including “The Making of Amazonia” and “Minuscule Bonus Episodes.”  They are filmed in French with English subtitles.

I watched this DVD with my 8 and almost 11-year-old children.  The kids thought it was “cute” and they both were engrossed watching it.  As a huge lover of monkeys, I too enjoyed watching this movie. To be honest, I’m not sure that this movie will hold the interest of all children.  I recommend this movie for older elementary kids, age 7+.  This is not a fast-moving, action-packed movie, but dependent on the child’s interest level, younger children may enjoy watching this movie.