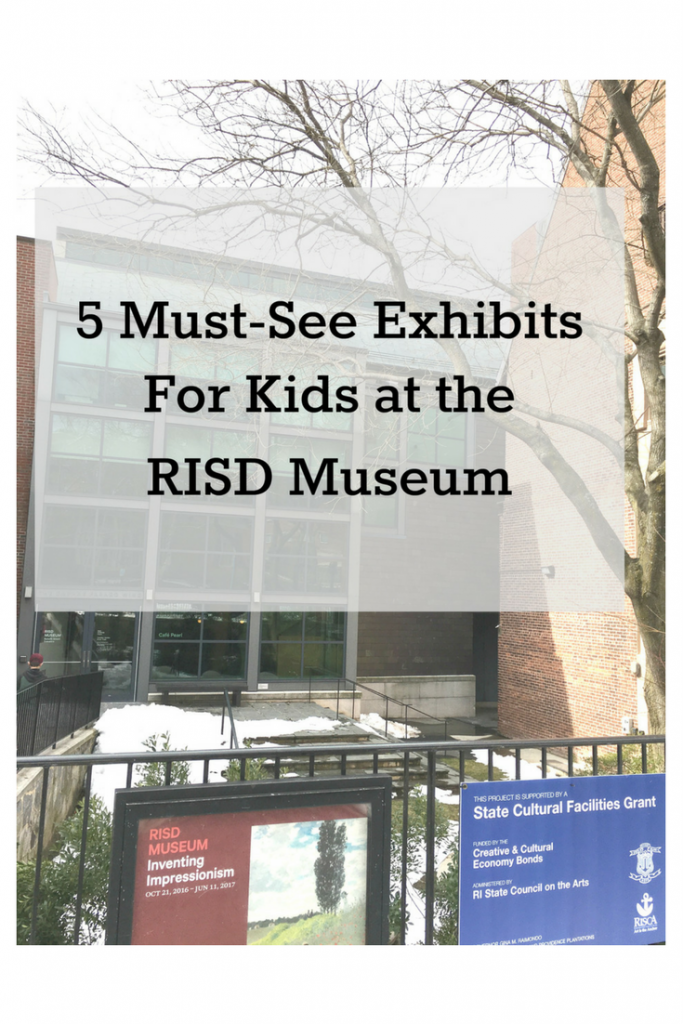 We recently took a family trip to the RISD Museum in Providence, Rhode Island. Since it’s a museum on the campus of the Rhode Island School of Design, I thought it was going to be a small, dinky place to spend an hour or two.  Boy was I pleasantly surprised at what a treasure trove of art is showcased in this museum!  We visited the museum on a Sunday, when admission is free.  In a rather quick, cursory tour, we were able to see almost all of the museum exhibits in a day.  After a long day of walking around the galleries, we spent some down time in the open studio where the family relaxed and crafted.

If visiting the RISD Museum with kids, I highly recommend checking out the following exhibits that will hopefully interest your kids, like they did ours.  I did not include pictures of the pieces because I think that it’s more fun to see the art for the first time in person.  I also only included pieces that are in the permanent exhibits, although the temporary exhibits have lots of interesting and fun pieces as well!

The 10-foot tall wooden sculpture of the Dainichi Nyorai Buddha is truly breathtaking.  The Buddha was originally installed in the museum in 1936.   After a 2-year, 2.7-million dollar renovation, the Buddha has a new home in the museum’s sixth-floor galleries, in a room of its own.

I think coffins and mummies interest most children.  The Egyptian Coffin of Nesmin is the highlight of the museums’s Egyptian collection. Nesmin was an Egyptian priest who lived during the Ptolemaic Period.  The details on the coffin, including images of protective deities,  are unbelievable.

Gilded Frost and Jet Chandelier (Above the East Stair)

Artist Dale Chihuly helped found the glass department at RISD and taught classes at the school until 1983.  His Gilded Frost and Jet Chandelier was created in 2008 and is comprised of 196 pieces.  This is a stand-out piece of art! Before reading the exhibition description my son thought the glass tubes were snakes!

The Ancient Greek and Roman galleries have several marble statues on display.  Be forewarned, the nudity will get lots of giggles from the kids!  The must-see piece that will interest kids is the marble sarcophagus.  The intricately carved fragments of the sarcophagus depict scenes of the Trojan War.  The museum acquired the sarcophagus in 1921, after more than 100 pieces were assembled to recreate the coffin.

The RISD Museum has a small, but impressive collection of Modern art.  Although children may not be familiar with the particular pieces displayed, many will recognize the names of such artists like Henri Matisse, Pablo Picasso, Jackson Pollack, Andy Warhol and Frank Lloyd Wright.

If you go to the Rhode Island School of Design (RISD) Museum:

Where: 20 North Main Street, Providence, Rhode Island 02903
You can also enter the museum at 224 Benefit Street

When: The museum is open Tuesdays through Sundays from 10 AM to 5 PM.  The third Thursday of every month it is open until 9 PM.

Food:  Cafe Pearl, operated by Bolt Coffee, is located inside the Benefit Street entrance and serves coffee-based beverages, pastries, salads and sandwiches.  No food or drinks are allowed in the galleries.